“If you touch that shift knob before we hit 8000 RPM, I’ll slap your hand away” said Jim Owens, head of Ford Performance. The look in his eye meant he was only half-kidding. So the GT350 revs like a Ferrari, impressive, I thought. But the revelation didn’t hit me until I slipped into second gear to sling around the first few corners of Atlanta Motorsports Park. Somehow, I wasn’t wrapped around a tree. Nor were the tires even squealing for grip. What kind of Mustang is this??? 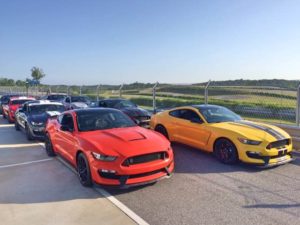 I shook with disbelief as I peeled onto the straight and put my foot down. The car confidently catapulted to triple-digit speeds, creeping past 8000 RPM as a beautiful thrum trumpeted out of the exhaust. This is no Mustang, I thought. This is something special.

The Mustang GT350 isn’t just good. It’s important, like the EP Collision Course by Linkin Park and Jay-Z. Like that album, it heralds a new era for its industry; this time, in American Motorsport.

It all began in 2015, when Ford finally gave the Mustang independent rear suspension. No longer did Mustang owners have to clumsily slide around every corner in a cloud of tire smoke. The new car came with a bevvy of other welcome upgrades, too: a shinier cabin, paddle shifters for the automatics, and a trifecta of engine options led by a burly, 435-horsepower V8. The pony car had grown up.

But to the gearheads at Ford Performance, the V8 ‘Stang just wasn’t good enough to earn the Shelby name. So they rebuilt almost everything, from the brakes to the seats to the whole front half of the car, and slammed a better engine under the hood: a 5.2-liter, flat-crank V8 pushing 526 horsepower. They christened the resulting car the Shelby GT350.

Now, anyone who’s been to Caffeine and Octane probably knows that the GT350’s predecessor, the 2013 Shelby GT500, had a whopping 662-horsepower. Compared to the GT350’s puny 526, that’s a whole Toyota Corolla of difference. Had Ford gone soft?

No. Because as cool as old Shelbys were, they weren’t very… smart. Without brains behind the brawn, Shelbys were snake-y on the track, and chugged fuel like an Escalade on the road. So once again, 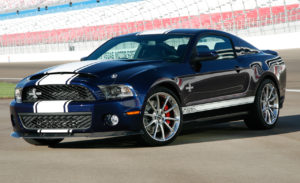 America’s muscle car king elicited only a condescending chuckle from Europe. Even Richard Hammond called it “as precise and dynamic as Noah’s Ark.”

So for Ford, bringing the horsepower down to sane levels was a good start to evolving the Shelby. Fitting magnetic suspension, bigger brakes, and supercar-ready tires from Michelin were also good moves. Overnight, the Mustang had become smart, sophisticated, and agile; the ultimate surprise attack on European carmakers. 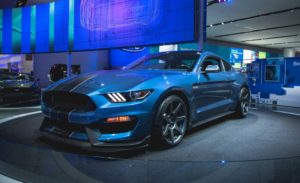 Back on the home front, as I gracelessly climbed out of the GT350R’s cockpit, hands and legs shaking, I felt I was walking away from history. For decades, American sports cars like the Corvette and the Mustang have nipped at the heels of European thoroughbreds from Porsche, BMW M, and Ferrari. But the insane engineering packed into the Corvette Z06 and Mustang GT350R, we’ve finally, and literally, overtaken them.

For the first time, American sports cars are truly competing on the world stage.