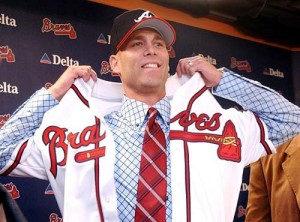 It’s been a rough year for Georgia sports. Just this week alone we saw 2 savvy veterans leave the Atlanta Braves organization. While this won’t make up for him no longer being a Bravo, Tim Hudson’s exclusive thank you letter published by the AJC is sure to put a smile on your face.

It’s hard to find a good starting place. My goal is to genuinely thank everyone who had a hand in making my time as a member of the Atlanta Braves some of the best that I’ve ever had, and to attempt to convey the true depth of my gratitude. Words on paper surely can’t be adequate, but I’m going to try my best.

When I was traded from the Oakland A’s to the Atlanta Braves before the 2005 season, a childhood dream was realized. I grew up a Braves fan just a few hours south of Atlanta, and it was hard for me to believe that I was going to actually play for the Atlanta Braves and legendary manager Bobby Cox. My family was young. We had a toddler (Kennedie), a baby (Tess) and a baby on the way (Kade). We were welcomed into the Braves organization with open arms. Our son was born two weeks into my first season, and our journey began. The Atlanta Braves are really all that our children know about this crazy baseball life, and we are so thankful for this upbringing for them.

I’m not even going to attempt to mention specific managers, coaches, players, front-office executives and staff. I have been so blessed to have spent the past nine seasons with some of the best of all of them in the entire game of baseball. That’s a gift and a whole lot of memories that I’ll have forever.

And to the city of Atlanta and the amazing fans in all of Braves country … my deepest thanks. Braves fans are one-of-a-kind. Your passion to win comes close to equaling that of the players that go out on the field each and every game. But when the team goes through rough patches, you’re there to encourage and cheer and believe that things will turn around. In my nine seasons, we definitely had some very high moments and some extremely disappointing moments. But one thing that I learned is this — once a Braves fan, always a Braves fan. No matter what. And as a player, that means more than you could understand.

Here comes the part that is hard for me to write without getting very emotional. … Winning divisional championships, clinching playoff spots, hitting the “occasional” home run and winning my 200th game were just a few of my favorite memories in a Braves uniform. But nothing compares with the memories that I have of meeting and spending time with some remarkable children and families fighting battles much bigger than the game of baseball. During my time with the Braves, I met kids whom I’ll never forget. Some of them are healthy and happy today, and some of them are no longer with us. But the impact that they had on me will last forever.

I was devastated on the night that I suffered my ankle injury. It was painful; it was potentially career-threatening; and I was just plain mad about the whole thing. But a mere 36 hours later, things changed. I was scheduled for surgery on a Friday afternoon. I was lying in a hospital bed at Piedmont Hospital when my wife read an email to me. To our utter amazement, the Children’s Healthcare campuses at Scottish Rite and Egleston had declared the day of my surgery “Tim Hudson Day.” All the staff and patients were encouraged to wear Braves gear, and the cafeterias ditched their healthy menus for ballpark food — hot dogs, nachos, popcorn, pretzels, cracker jack and other fun things. And they had stations set up where the kids who were in-patient there could make me cards and write me letters and even sign baseballs for me. At that moment, everything changed. My injury was not what I would have chosen for myself, but in the grand scheme of things, it was just a minor setback. At that very moment, those kids who were literally fighting for their young lives were sending encouraging wishes to me. What a gift.

So, thank you to Children’s Healthcare of Atlanta, the Make-A-Wish Foundation of Georgia and Alabama, and the countless other organizations that have allowed me to be a small part of what you do. While I may be wearing a different jersey next season, my family and I promise to continue to support children and families in need. It’s what we do and what we love. I may be playing baseball on the West Coast, but my home, and the home of the Hudson Family Foundation, will always be here in the South. We vow to continue to do all that we can to serve those who need us.

Thank you … everyone … for an unforgettable nine seasons as part of the Atlanta Braves organization. It will always be a significant part of who I am, both as a baseball player and as a person.