Tim Tebow Steps Up on Flight Leaving From Atlanta

Erik Dellenbach told the Times-Union that reports that Tebow emerged from the first class section of the plane to comfort the family and pray with them and other passengers were accurate. 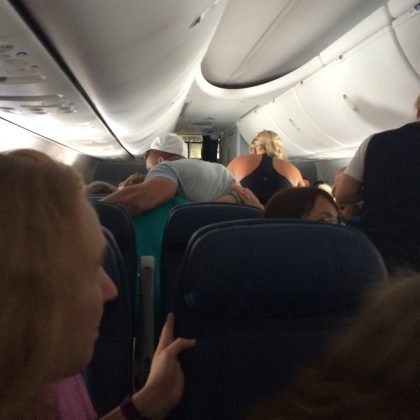 “I have to share this story! I was traveling on Delta Airlines Flight Number 1772 from Atlanta, Georgia to Phoenix, Arizona when there was a medical emergency on board. An older gentleman began having what appeared to be heart problems, and he went unconscious. I watched strangers from all over the world and every ethnicity come to the help of this man for over an hour! Whether it was chest compressions, starting an IV, helping breathe life into this man, or praying everyone helped! I listened to shock after shock from the AED machine and still no pulse. No one gave up. I observed people praying and lifting this man up to the Lord in a way that I’ve never seen before. The crew of Delta Airlines were amazing. They acted in a fast and professional manner! Then all of a sudden, I observed a guy walking down the aisle. That guy was Tim Tebow. He met with the family as they cried on his shoulder! I watched Tim pray with the entire section of the plane for this man. He made a stand for God in a difficult situation. The plane landed in Phoenix and that was the first time they got a pulse back! Please share this with your friends! Pray for this man and his family, and also thank God that we still have people of faith who in times of difficulty look to the Lord!”

A Delta spokesman did confirm to the Atlanta Journal-Constitution that there was a medical emergency on that flight.

How do you feel about Tim Tebow?

Rolex Tournament of Champions Week Opens with Junior Am