Chef Mikiel Arnold wants Atlantans to have a Fourth of July to remember, so for the first time, he is bringing his Peruvian street food to the Lenox Square 4th of July Fireworks Celebration, where thousands of hungry revelers will have a chance to experience The Freakin Incan.

One of Atlanta’s favorite summer traditions, Lenox Square’s Legendary Fourth of July, is set to return with a star-spangled bang! For over half a century, Lenox Square has celebrated Independence Day with patriotic activities for the entire family. With over 10,000 fireworks, the show is one of the largest fireworks displays in the Southeast. This year’s activities will include a 15-minute fireworks show, musical entertainment and The Freakin Incan.

In the restaurant, expect a few new dishes to the already growing menu. Duck ceviche, Camarones al Aji Amarillo, Adobo de Chancho, and chicken and steak Anticuchos to name a few. The Freakin Incan will also be gearing up for their Peruvian Independence Day celebration starting on July 28th and into the weekend. There will be food and drink specials all weekend long!

Thrillist named The Freakin Incan and it’s Peruvian street food as one of “The 16 New Bars and Restaurants” in Metro Atlanta to watch and Eater Atlanta, one of the top food blogs in the South, loves what “The Incan” brings to your table.

RoamingHunger.com gives The Freakin Incan its highest marks. “From empanadas to chicharron de pollo, these dishes are superb, and will knock you off your feet!”

The Atlanta Journal Constitution featured The Freakin’ Incan as one of the featured vendors at the upcoming Atlanta Taco Festival.

The Freakin’ Incan  is located at 4905 Alabama Rd., Suite 340 in Roswell, but it it easily accessible from Atlanta, East Cobb and Woodstock.

Don’t miss the daily and weekly specials and a chance to experience some of the region’s best street food.

“The most enjoyable part of the business has been the interaction with our clients and sharing in their enjoyment of our food,” says Arnold. 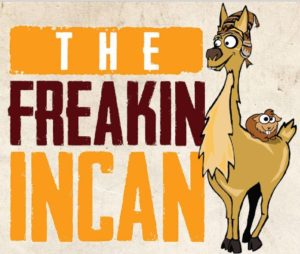 New Art Installation Will Bring The Outdoors In At Hartsfield-Jackson