After another typical Falcons loss this year, a blown lead to the Carolina Panthers 21-20, Tony was emotional yet thankful.

“It’s time for me to go into the next stage of life just like everybody else,” he said. “Nobody’s immune to this, and the way I’ve been able to go out on my own terms, it’s a blessing. And like I said, I have no regrets.” 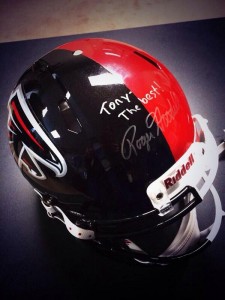 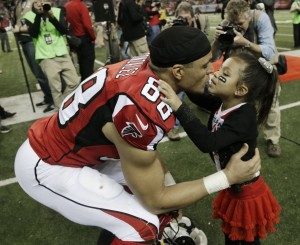 His wife and three kids greeted him with hugs at halftime after Falcons owner Arthur Blank presented him with a commemorative helmet (seen above) and the Georgia Dome flashed video highlights of his 12 years with Kansas City and 5 with Atlanta. A video that reminded you of his dominance at the TE position and his trademark dunking skills.

Gonzalez ended the game with 56 yards receiving on four catches, leaving him as the league’s No. 2 career leading receiver behind another G.O.A.T. Jerry Rice. List practically every record for a T.E. and Tony has it. The greatest tight end the NFL has seen.

Just like Kansas City before us, the city of Atlanta will miss Tony G. He was the walking definition of a security blanket for Matt Ryan & any QB he played with for that manner. A consummate professional, role model and a true class act on & off the field. Not only is this a loss for the Falcons franchise, it’s a loss for the NFL.

It’s a bittersweet feeling watching him walk away from the game without a Super Bowl ring. Even more so after being only 10 yards short of a SB appearance. With that said, there is one place we know for certain he’ll be walking in…Canton. Thank you Tony. 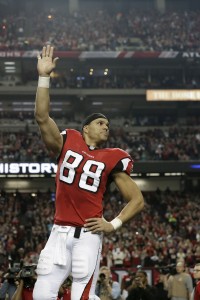 Famous Polaris Lounge to Reopen in 2014

The Top Sneakerheads in Georgia