A First-Person Look Inside the Macon Film Festival

While I am a writer for GAFollowers, one day, I dream of making movies and to this day I do some movie making on the side. Recently, I joined my fellow University of North Georgia students and good friends, Brad Kennedy and Luke Pilgrim, for a trip to the Macon Film Festival to see their short film, “The Apology Service.” Not only due to my relationship to the creators, but my involvement as a Production Assistant for the project attracted me to come and support them. However; after coming back, I realized I was quite blessed to see several short films by many talented individuals.

I arrived at the festival on Saturday and made my way down to where the film would be shown, the Macon Bibb Convention & Visitors Bureau. “The Apology Service” was the tail end of a “block” that showed 5 unique shorts with varying styles and themes.

The first short that was shown was, “Confession: 5 pm or by Appointment” directed by Joseph Brennan. The short followed a young priest as his lover approaches him in a confessional booth about the future of their relationship.

This was followed by “Bird Dog” by Katrina Whalen, a slice of life tale about a young girl who after being dared by her brother to swallow a dove heart fears a dove is growing inside her, all the while she faces new situations in growing up.

The third film on the docket was “Ridgeland” directed by Taylor MacDonald. A restless young man’s ambition gets the better of him when he decides to escape his dead end life, only to find harsh reality waiting for him up North. 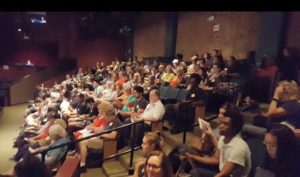 The next film that was shown was “Karkass Karts” directed by Ben Nelson. This stylish short covers three brothers who inherit their father’s funeral home in a town where hardly anyone dies. When business becomes bad, they become even badder.

And finally the last film was the one I came down for, “The Apology Service.” In a world where everyone is disconnected, an apology, as personal of a thing that it is, is serviced to a company that does it for you. It follows the best “apologist” Jackson as he begins to question his life style and profession as he has romantic fantasies about a coworker.

I thoroughly enjoyed all the films and the few individuals that I met involved with these shorts were great people. After the block, I had a great conversation with Ridgeland’s Jean-Luc McMurtry, who plays the main character Kieth.

“The movie is about friendship and circumstances and how circumstances effect the kinds of decisions and choices you make,” McMurtry said.

He also added the story connected to him because the director, Taylor, and himself grew up in a small town like the characters in the short and knew what it was like wanting to leave while also realizing the things you leave behind.

I will state that I thoroughly enjoyed my time down at the festival and got more than I bargained for when it came to great entertainment. I will be attending next year, and I implore you all to do the same.