Yesterday at a public GSU SGA meeting, a student calmly and politely asked President Mark Becker if he would take questions from the public. This student was the 2016 MLK Jr Humanitarian Award recipient, Asma Elhuni mother of four. What proceeded was her immediate manhandling and aggressive removal from the room by heavily body-armored and armed police stationed specifically to suppress any potenital disruption, while students and senator sat stiff. Although Becker had reserved the Q&A for the SGA senate, student organizers printed and passed out copies of questions posed by organized students to the senators in case they were willing to pass along student concerns to the president. Asma made a decision in a spontaneous act of courage that she would stand to speak regardless and simply ask the question:

She made the decision after having been essentially intimidated with a direct and personal warning from the arresting officer who threatened to give her a criminal trespassing charge and a 2-year ban from campus if she were to “disrupt” the Q&A. She did not want to allow threats to students effectively silence serious and legitimate concerns. 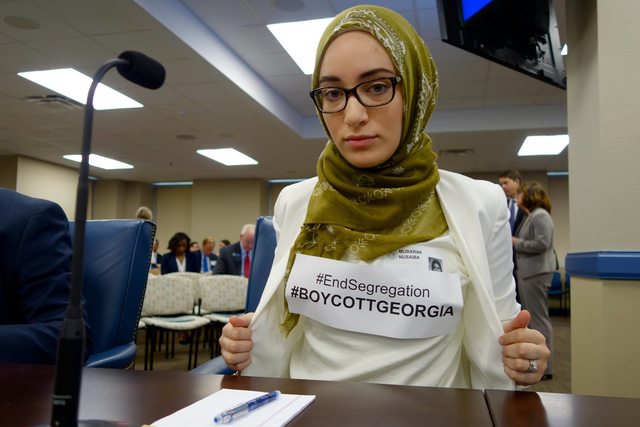 This is the second time this student has been issued a ban for “trespassing” on her own campus. The first time from speaking out during the 2016 Commencement Ceremony which was held at a public event at the Georgia Dome. The empty scare tactic was rescinded the next day, as enforcing such a ban on a student exercising her freedom of speech was clearly impossible to enforce.

This second ban will also be rescinded unless Georgia State University and Mark Becker are willing to set a dangerous precedent that severely limits the freedom and self-determination of students to speak and ask questions. We are tied now to the stadium communities of Peoplestown, Summerhill, Mechanicsville, Pittsburgh, through our tuition and through our generational and transformational mass development and gentrification project of their community. As long as Dr. Becker ignores his own contradictions of promising assurances to the distressed community while simultaneously refusing to sign a binding agreement that would institutionalize and make true all those promises, students who do not consent to the handling of the development will continue to publicly hold our university president accountable. We urge out president to simply respond to the concerns of the community in a meaningful way and meet with students and residents alike to work out an agreement. We’re counting on him to do the right thing. We should not expect to be wrong in our belief that a university president would be keen to listen and engage with students in an open and transparent way.


Meanwhile, the students view the organizing of police forced to specifically target student protest as a severe and egregious blow to the dignity, respect, and morale of the student body. This “protest police” unit and the installing of fingerprint scanners designed to track our movements on campus together present a stark contrast to our view of our president being open and accountable to his students, not cold calculating and quick to suppress students concerns. The future livelihoods of stadium communities are directly tied together with our role as students, as they will be vastly determined by how Georgia State and Mark Becker choose to act as the community’s vital ‘anchor institution’. Will students allow our university to direct our funds to a massive gentrification that will permanently alter the race and class dynamics of the region? Will we be active and exercise our freedom of speech and speak to issues that directly impact us, or will we lay down as passive consumers of an educational product that sinks us into debt and indentured servitude? The organized community and their elected leaders continue to seek out a CBA, as it is the only just conclusion to more than a half-century of broken promises, stolen money, razing of homes, mass displacement and municipal neglect. Student and residents united to tell Becker: SIGN A CBA!!