On Monday morning, the Atlanta Super Bowl LIII Host Committee was officially handed host committee responsibilities for next year’s Super Bowl from the National Football League and Minnesota Host Committee in a press conference at the Mall of America in the Twin Cities.

The entire state of Minnesota did a great job with the execution of Super Bowl LII, but now once again, it’s Atlanta’s turn.

Super Bowl LIII will be played in Atlanta on February 3, 2019, at Mercedes-Benz Stadium.

NFL Commissioner Roger Goodell took part in the ceremony, along with members of the Atlanta Super Bowl LIII Host Committee, including Executive Director Carl Adkins and Chief Operating Officer Brett Daniels, as well as President of the Atlanta Sports Council and Super Bowl LIII Host Committee Board of Directors Dan Corso. Representing the City of Atlanta at the ceremony was new Atlanta Mayor Keisha Lance Bottoms.

“We are officially on the clock for Super Bowl LIII and we couldn’t be more excited for this opportunity to showcase Atlanta to the rest of world,” said Daniels. “We are already a full year into our planning process and know everyone will feel the incredible passion and pride of our city as we intend to put together the best Super Bowl experience ever.”

“Today is a significant day for the Atlanta community as we are 363 days away from the Super Bowl returning to our great city, state and region,” said Corso. “We have been circling this date on our calendars and we are thrilled it is finally here.”

The Atlanta Super Bowl LIII Host Committee introduced a video at the press conference titled, “We Are ATL,” featuring popular Atlanta musician, actor, philanthropist and devoted NFL fan, Ludacris. The video also included Atlanta residents in locations around the city describing what the words ATL mean to them.

The focus of the Super Bowl LIII color palette will be electric red and deep blue. These colors represent the bright, bold and vibrant energy of Atlanta’s thriving culture and the dramatic architecture of Mercedes-Benz Stadium. Together, the NFL’s color palette, photography and graphic elements will harness that energy and illuminate the way to Super Bowl LIII, the brightest moment of the 2018 season. 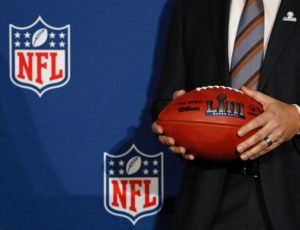 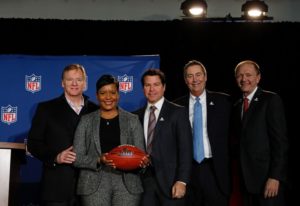