Atlanta Protests: The Calm Eye of the Hurricane

In the wake of tragic deaths that rocked our nation, hundreds banded together in Atlanta to take a stand and use their voice to highlight the injustices they have seen.

Last week, everyone around the world witnessed the deaths of Alton Sterling and Philando Castile, by way of videos taken by witnesses in the case of  Alton Sterling and by the Castile’s finance. These two murders tipped America off of the very small point it had been balancing upon. Black Lives Matter began a call for justice in the face of certain injustice. These two deaths come after the Freddie Grey news just a few weeks prior, where officers were not held accountable by the court of law. Details are still coming in, even now, however groups are coming together to take a page out of the history books and are exercising their right to assemble peacefully and protest.

While there were a few protests around the country that had many instances of violence, here in Atlanta, peace was the word protesters clung to in hopes that change would be incited within our community. 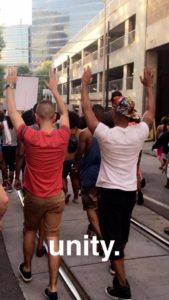 Social media was filled with hashtags, pictures, and videos in support of #BlackLivesMatter. The use of social media during the protests has changed the game in which authorities choose to respond during peace protest; millennials have the technology that was not around during the 1960s Civil Rights Marches, so they are using this to their advantage to capture moving pictures of unity and highlight any wrongs they encounter.

The right to assemble moves many to action all over Atlanta. Aerolyn Shaw of Atlanta spoke about what compelled her to participate.

“All week I felt so emotionally exhausted. It’s a challenge to go to work and try to be productive when there’s so much going on and you feel helpless. I felt that marching was the very least I could do. I don’t have political power, I don’t have a ton of money, but I do have a voice and can join with others to make a statement.”

Jamel Stubbs joined the protest after speaking to a family member about the events of the part week.

“Well, my younger sister told me about it the day before and I said, ‘Yes we have to do it,’ ” Stubbs said. “It’s a must to get out and do this protest and it meant a lot to us just to see so many different faces all standing up for the same cause. It was great to see.”

And the movement has different meanings to each person involved. “This movement is all about unity and solidarity. Despite what some may think, the core message is that we all need each other to make real change. It’s important for our generation to be vocal because soon, if not now, we will carry the responsibility of making sure social justice and equality is taken seriously and evolves for good. Our parents were the future for our grandparents; we’re the future for our parents and those younger than us,” stated Ms. Shaw. 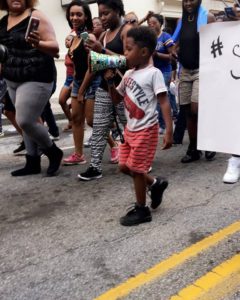 And Ms. Shaw is correct in saying that this generation is carrying the pride of what past generations fought so long for, and though it’s now 2016, we are still seeing bouts of injustice throughout the county, and even the world. That’s why at the protest you saw not only members of the African-American community, but citizens of all races, genders, creeds, and religions, coming to lift their voices alongside as well.

“It’s amazing to be among so many people of all races, gender, sexual orientation, young, old, who feel passionately about the same cause. I was marching down Peachtree and literally burst into tears. From being inspired and being exhausted. Seeing little black children with tiny fists in the air, seeing non-POC people join in, seeing Muslims, with all the hate they face, still join in. It was amazing.”

We won’t know the outcome of the #AltonSterling and #PhilandoCastile cases for a while, but for now here in Atlanta, we have come together and we realize that “United we stand, divided we fall.” 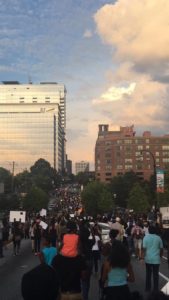 It's Been An Eventful Off-Season For the Atlanta Hawks