Atlanta in Mourning After Devastating Orlando Shooting Rocks the Nation

Tragedy struck early Sunday morning at the Pulse Night Club in Orlando, Florida when Omar Saddiqiue Marteen claimed the lives of at least 49 people and injured 53 others. Before being killed by the Orlando Police Department, Omar dialed 911 and claimed allegiance to Isis. President Obama has classified the assassin as a “homegrown extremist”. Even more disturbing, a clear distinct reason as to why U.S. native Marteen converted to terrorism and targeted a popular LGBT night club, could remain a mystery.

Deemed the deadliest mass shooting in U.S. History, the effects of this massacre has reached the hearts of many nationwide. Here in Atlanta, thousands have mourned the tragic deaths of the men and women of Orlando. Over the weekend, a candlelight vigil was held in Midtown Atlanta on 10th and Piedmont to show solidarity and support of the Orlando terror attack. Among the lives honored was Atlanta Bachata Fest dancer Xavier Emmanuel Serrano Rosado. Rosado was currently a performer in Disney’s Live Mickey’s Rockin’ Road Show, according the Atlanta Journal Constitution. 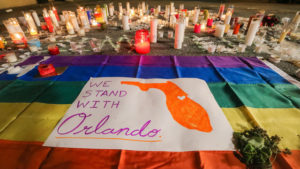 Ten Atlanta also held a Sunday night vigil expressing “What makes us different makes us beautiful. We need to stand strong in the face of terror and show them they can’t take away our pride”, says the restaurants Facebook page.

Georgia Equality, an organization that ensures the fairness, safety and opportunity for lesbian, gay, bisexual and transgender communities has released a statement regarding the massacre.

“This tragedy is a sobering reminder that although large legal advancements have been made for people in the LGBT community, the hatred and desire to cause harm to our community is alive, well and empowered,” the statement said.

The organization will also host a vigil on Tuesday, June 14 at 7:00 p.m. at the Center for Civil and Human Rights. Over 30 Georgia LGBT organizations have signed the statement will also be apart of the candlelight vigil.

Nationwide, the American Red Cross has requested assistance, as many victims are in need of blood. The Atlanta branch has set up blood drives across the metro Atlanta area for locals to donate blood. Notably, Georgia’s own Chik-Fil-A, opened their doors on a Sunday to provide food for those giving blood in Orlando.

Although there are no current credible threats targeting Atlanta, the Atlanta Police Department has assured the public that the police force has taken the necessary precautions to protect the City of Atlanta. Patrols have been increased at well known LGBT establishments including, but not limited to, places of worship and bars. Moving forward, the Mayor of Atlanta hopes to have a more detailed protection plan formulated for the LGBT community.

The targeted deadline is Thursday, June 16 with implementation to take place during the following weekend. 11 Alive’s Doug Richards reported that the protection details will not be disclosed, but may follow the same protection plan as the Annual Peachtree Road Race.

A full investigation is currently under way to determine how this terrorist remained undetected by the U.S. security system.