John Dwyer, President of AT&T’s Prepaid Portfolio division joined Neka King, Artist and Muralist from Atlanta for the unveiling of the new mural, The Story Teller at Mercedes-Benz Stadium for a ceremony on Thursday.

Also on hand were officials from AT&T, Atlanta dignitaries and members of the Atlanta Art Community.

This is just part of AT&T giving back to Atlanta in many ways. AT&T has been investing in Atlanta and its surrounding communities for more than 140 years.

For the past two years, in partnership with Living Walls, the AT&T Perch at Mercedes-Benz Stadium has been used to shine a light on talented local artists. As seen by millions attending events at the modern stadium, in November 2018, the first mural to grace the AT&T Perch was done by local artist Faatimah Stevens. Faatimah’s piece, titled “Above & Beyond.” will soon be auctioned off to benefit a local charity.

This week, AT&T unveiled its newest mural to be displayed at the AT&T Perch. The mural, titled “The Story Teller,” was created by Neka King and celebrates the spirit and stories of the Westside.

King is an illustrator and muralist. Located in Atlanta, GA, she received her BFA in Studio Arts from Ernest G. Welch School of Art and Design at Georgia State University in 2016.

Her work relates to her personal experiences as Black, American, Female, and Southern. The intersection of these identities are layered with their respective histories to encounter questions of power structure, sexuality, and representation. In particular she employs these tactics to disrupt the narrative around the image of the black body. 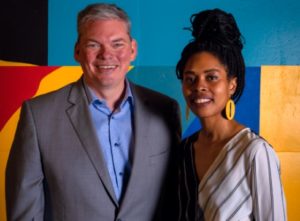 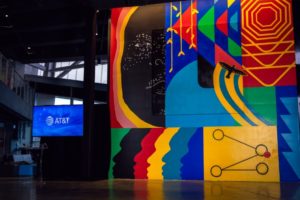