“Dominique Belongs To Us” Documentary Debuts Tonight on ESPN at 8 p.m.

Dominique Belongs to US

This impressive documentary about the Atlanta Hawks legend will be shown again on SEC Network April 27 at 9 p.m., but catch this or record it tonight as part of SEC Storied.”

“Dominique Belongs To Us” Directed by Kenan K. Holley

Before we came to know him as “The Human Highlight Film,” a teenage Dominique Wilkins quickly became the toast of his new hometown of Washington, North Carolina. The 6’8” basketball star led the Pam Pack to 56 straight victories and two state titles. But when he chose the University of Georgia over local ACC schools, the cheers went away as they turned to jeers and resentment twisted the high school highlights into a lowlight.  That betrayal left ‘Nique distrustful of fans until a community of support in Georgia convinced him otherwise and paved the way for his return home.

He went on to star for the Atlanta Hawks and a member of the Naismith Memorial Basketball Hall of Fame.

Dominique Wilkins earned the nickname “Human Highlight Film” with a plethora of spectacular individual plays dating back to his college years at Georgia. A member of the NBA All-Rookie Team in 1983, the high-flying 6-8 forward was been named to seven All-NBA teams and nine consecutive All-Star squads and is a two-time winner of the NBA Slam-Dunk Championship.

In 1986 he won the NBA scoring title with an average of 30.3 points per game, and in 1992 he set an NBA record by sinking 23 free throws in a game without a miss. He’s the Atlanta Hawks’ all-time franchise leader in both scoring and steals.

One of only 12 players to score over 25,000 points in his NBA career, Wilkins returned to the NBA in 1996-97 after one year in Europe and led the San Antonio Spurs in scoring with an 18.2 average at the age of 37. He left the NBA ranked seventh on the all-time scoring list with 26,534 points and 10th in career scoring average at 25.3 PPG.

Born in Paris, France, where his father was stationed while with the Air Force, Wilkins attended high school in Washington, North Carolina. The older brother of NBA player Gerald Wilkins, Dominique attended college at the University of Georgia, where he averaged 21.6 points over three seasons. It was his acrobatic exploits there that earned him the nickname of the “Human Highlight Film.” 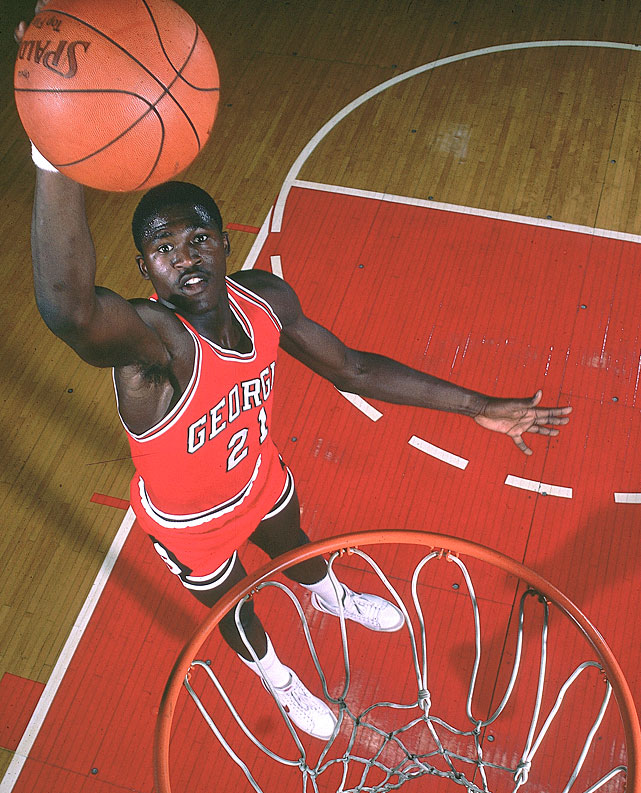 He entered the 1982 NBA Draft after his junior year and was selected by the Utah Jazz with the third overall pick. He refused to sign with the Jazz, however, and was dealt in September, 1982 to the Atlanta Hawks for John Drew, Freeman Williams and cash. Wilkins was an instant hit for the Hawks, averaging 17.5 ppg as a rookie. He came back in his second season with an average of 21.6 PPG, starting a remarkable streak in which he would average above 20 points per contest for 11 consecutive seasons.

Wilkins was instrumental to the Hawks’ success in the late 1980s as the club recorded 50 wins in four straight seasons from 1985-86 to 1988-89. During that span, he poured in more than 30 points per game twice, and for the four years combined he averaged 29.1 ppg. In 1988 he also scored 29 points in 30 minutes of action in the All-Star Game. In the postseason, he averaged 31.2 points and despite the Hawks narrowly missing out on reaching the Eastern Conference Finals after losing to the Boston Celtics by a mere two points in Game 7 of the conference semifinals, he gained more respect as a result of his epic battle with Larry Bird. 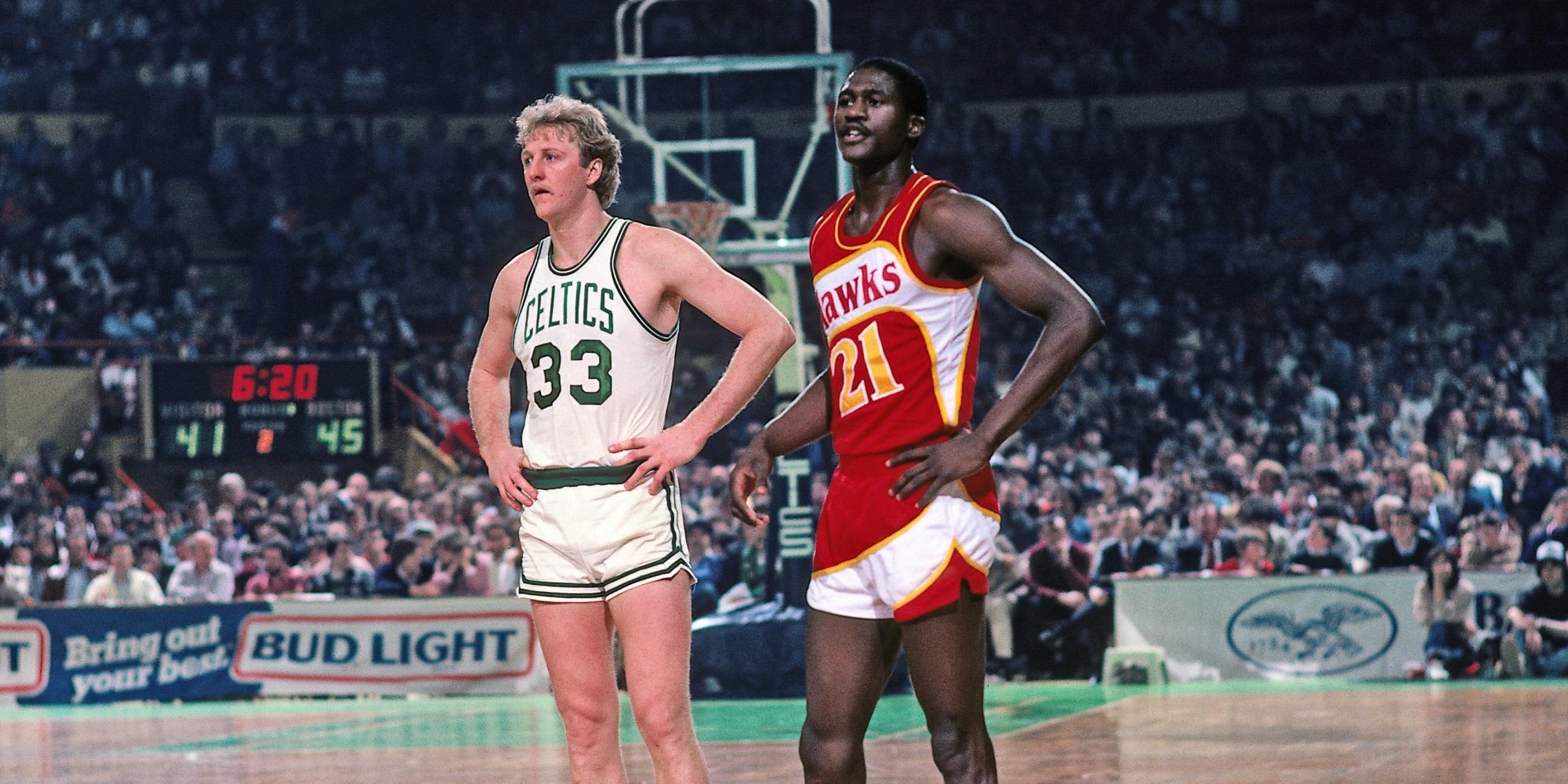 In the early 1990s, while the Hawks were slipping from a 50-win team to a .500 ballclub, Wilkins evolved from a pure scorer into a more all-around contributor. In 1990-91 he grabbed a career-high 9.0 rebounds per contest, and he topped 3 assists per game that year for the first time. Nearly injury-free for most of his career, he suffered a season-ending rupture of his Achilles tendon midway through the 1991-92 campaign.

Some thought the injury might end Wilkins’s career, but the 32-year-old bounced back in grand fashion the next year, averaging 29.9 ppg to finish second to Michael Jordan for the league scoring crown while maintaining his solid all-around play. That same season he became the 17th player in NBA history to rack up 20,000 points.

Midway through the 1993-94 season — Wilkins’ 12th with Atlanta — the Hawks shocked their fans by trading their all-time leading scorer to the Los Angeles Clippers for Danny Manning. Wilkins became a free agent after the season and signed with the Boston Celtics in 1994-95. Although he was the Celtics’ leading scorer, his average of 17.8 points per game was his lowest mark since his rookie season.

The summer following the season, Wilkins, unhappy with his role on the rebuilding Celtics, signed to play for Panathinaikos Athens of the Greek League. He averaged 20.9 points and 7.0 rebounds in 14 games for Panathinaikos and led the team to the European Championship for Men’s Clubs in 1996. Wilkins was named the MVP of the European Final Four in Paris.

Before the 1996-97 season, he returned to the NBA, signing a contract as a free agent with the San Antonio Spurs, who was seeking to add bench scoring. Wilkins gave them more than they could have hoped for, leading the team with an average of 18.2 PPG in 1996-97 and also contributing 6.4 RBG. However, after one season, Wilkins once again went overseas, this time signing a contract with Teamsystem in Italy for the 1997-98 season.

He returned to play his last season in the NBA during the 1998-99 campaign alongside his brother Gerald with the Orland Magic. In only 27 games, he averaged just 5.0 ppg and 2.6 rpg but will always be remembered as one of the game’s most exciting players.

A Monday Night at 10 Degrees South

What the Atlanta Braves can Do that No Other Team Can