On the heels of a historical week when it comes to Dr. Martin Luther King Jr. April 4 marked the fiftieth anniversary of the death of the civil rights leader, and the world once again turned its focus to this leader and American historical icon.

A Nobel Peace Prize winner and the first president of the Southern Christian Leadership Conference, King led the 1955 Montgomery bus boycott and the 1963 March on Washington. His “Letter From a Birmingham Jail” and “I Have A Dream” speech remain important civil-rights documents.

In countries around the world, bells tolled 39 times at 6:01 p.m. Wednesday (when King was shot) in remembrance. At the King Center campus in downtown Atlanta, family members of the civil rights legend will place wreaths on the crypts of King and his late wife, Coretta Scott King.

But across the border in South Carolina, there was a quieter celebration at a historical site dedicated to a man that was a mentor to Dr. King and a leader of men and women in many ways.

Perhaps best known as the longtime president of Morehouse College in Atlanta Benjamin Mays was a distinguished African American minister, educator, scholar, and social activist. He was also a significant mentor to civil rights leader Martin Luther King Jr. and was among the most articulate and outspoken critics of segregation before the rise of the modern civil rights movement in the United States. Mays also filled leadership roles in several significant national and international organizations, among them the National Association for the Advancement of Colored People (NAACP), the International Young Men’s Christian Association (YMCA), the World Council of Churches, the United Negro College Fund, the National Baptist Convention, the Urban League, the Southern Conference for Human Welfare, the Southern Conference Educational Fund, and the Peace Corps Advisory Committee.

Located at 237 North Hospital Street, in Greenwood, SC, the Mays Historical Preservation Site includes Mays’ birth home, museum, classroom and statue honoring Dr. Mays and his legacy. The site, adjacent to and part of the old Brewer School in Greenwood, which has its origins back to 1872, was chosen because of its historical significance. Dr. Mays’ birth home, previously listed as one of South Carolina’s Eleven Most Endangered Properties, was originally located in a pasture in another part of Greenwood County in the community of Epworth. In 2004, the SC Palmetto Conservation Foundation purchased the home from the owners and moved it to its current site.

Atlantans and those across Georgia should experience a trip to this piece of history that is just three hours from Atlanta.

“We get many visitors from Atlanta, including students from Benjamin Mays High School,” offered Chris Thomas, who serves as a one man caretaker of the property and is a wealth of knowledge about Dr. Mays. “I hope they are inspired by not only the life of Dr. Mays and how we honor that here, but also get a taste of African American history.”

Thomas says they can’t experience something unique like this anywhere else. This is history you can see, smell and touch.

Visitors will tour the childhood home of Dr. Mays and understand his upbringing from a sharecropper’s son to president of Morehouse College. The Benjamin E. Mays Historical Preservation Site contains Dr. Mays’ birth home, furnished with circa 1900 furniture. In addition, the site has a barn-like structure that serves as as modern museum and theater. The museum chronologically displays Dr. Mays’ long life in photographs and wall narratives. Visitors will find a large collection of his books, writings, films, speeches, and personal items. The theater holds about 50 people and can be used as a conference room as well as a theater to show documentary films about the life of Dr. Mays and play many of his CD audio speeches. Students can spend a full day of learning and experiencing the life of Dr. Mays. It’s a sprawling property, but easy to walk and you won’t feel rushed.

The property also contains a cotton field. There are picnic tables under a large oak tree nearby and plenty of parking is available. The house and museum are handicap accessible. 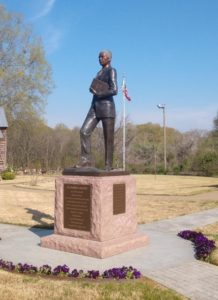 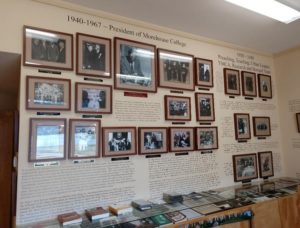