Bud Selig has seen it all when it comes to baseball. So he felt it was time to put down in words what he has experienced in almost 60 years of baseball as a fan and a caretaker of the game.

Selig appeared in Atlanta on Wednesday at the Marcus Jewish Community Center of Atlanta to talk about the book, his career and the state of the game we all love.

With a new book, “For the Good of the Game” chronicling Selig’s career, it takes fans inside locker rooms and board rooms, and offers an intimate, fascinating account of the process involved in transforming an American institution. Featuring an all-star lineup of the biggest names from the past forty years of baseball, Selig recalls the vital games, private moments, and tense conversations he’s shared with Hall of Fame players and managers and the contentious calls he’s made. He also speaks candidly about hot-button issues including the steroids scandal and the labor and economic issues that threatened to destroy the game.

The Milwaukee native brought about more change during his tenure than his eight predecessors combined. He ushered in some of the most important, and controversial, changes in the game’s history – modernizing a sport that that had remained virtually unchanged since the 1950s. In this enlightening and controversial book, Selig goes inside the most difficult decisions and moments of his career, looking at how he worked to balance baseball’s storied history with the pressures of the twenty-first century to ensure its future.

Selig’s advice to the crowd gathered to get his new book was to “dream big.” He did. From a modest upbringing in Milwaukee, to bringing baseball back to Milwaukee with the Brewers, to dealing with topics like steroids, Pete Rose and technology in baseball while Commissioner, Selig definitely left the game in better shape than when he inherited the post. Selig also talked about his relationship with Braves great, Hank Aaron, who he spent time with earlier in the day.

You can see the book here.

Selig is the former ninth Commissioner of Baseball. A life-long baseball fan and long-term baseball executive with the Milwaukee Brewers, he’s known for contributions to America’s Pastime including reform of the economic structure of the game, as well as labor and drug-testing policies. 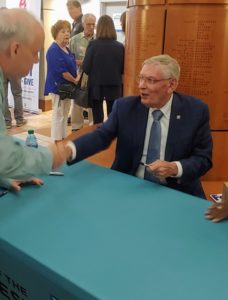 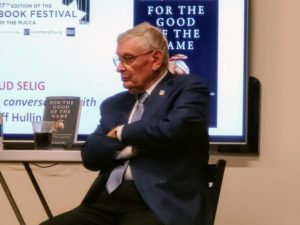 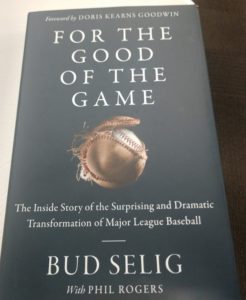 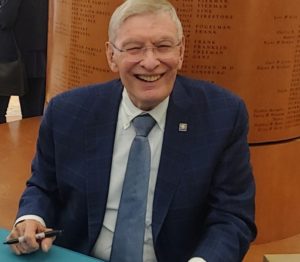