Kids Day on the Course

Get ready for five full days of exciting golf as The Greater Gwinnett Championship rolls into TPC Sugarloaf on April 15, with the event officially opening to the public on April 17.

The Greater Gwinnett Championship will attract some of the most recognizable names in golf. Already scheduled to participate are twenty-seven of the top-30 players from last year’s Champions Tour money list, including the winners of the first three events John Cook, Rocco Mediate, and Bernhard Langer. They will be joined by Fred Funk, Roger Chapman, David Frost, Willie Wood and Michael Allen – all two-time winners on the Champions Tour in 2012.

Multiple Champions Tour winners Kenny Perry and Jay Don Blake, both runner-up finishers at TPC Sugarloaf during their respective PGA Tour careers, will also be in the field. World Golf Hall of Fame member Langer will be joined by fellow Hall of Fame members Hale Irwin, Tom Kite, Larry Nelson and Sandy Lyle, all who have competed at TPC Sugarloaf during their illustrious PGA Tour careers.

While any day is a great day for family fun at the golf course, I especially want to highlight Saturday, April 20.  From 1:00pm through 4:00pm, you can head out for Kids Day on the Course! The kids area will include local mascot visits, face painting, games and a chance to Putt for a Prize! 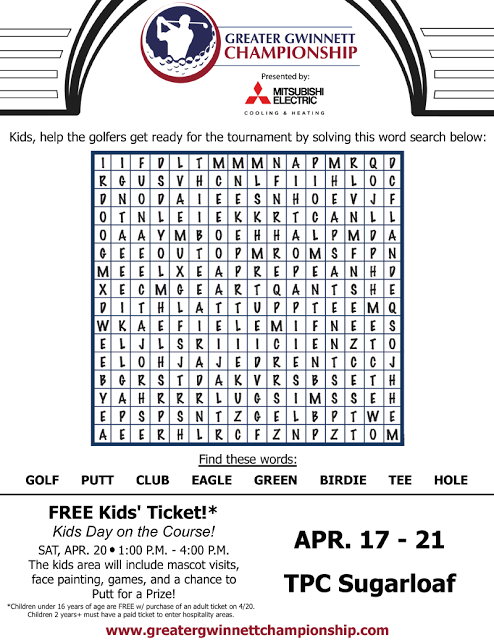 To get you ready for Kids Day on the Course, I have a fun word search to share with all of you.  Print it out, share it with your kids, and get them excited for a day of golf.

Tickets are $20 for a day pass or $55 for a weekly badge.  Make sure to buy your tickets in advance, because they will be slightly higher if you wait until the event.  Children under the age of 16 years are admitted free with an adult ticket.

Governor Nathan Deal Says He Will Not Support Integrated Prom