Summer basketball in Atlanta will never be the same thanks to the Atlanta Entertainment Basketball League (AEBL). The third season of the the summer pro-am league just wrapped up. The league started in Central Park but has outgrown that location due to great support from the city. Now the games are held at Grady High School. The AEBL is a part of the community and offers free entry to all the games.

The vision of the AEBL is to grow into one of the premier summer pro-am leagues in the country and compete with other cities like Chicago, Los Angeles and New York. With the support from NBA players and other music celebrities it is well on its way to doing just that. NBA players are not allowed to play until July 1st. Over the last 6 weeks of the AEBL season, 18 NBA players (Lou Williams, Josh Smith, Paul Millsap and Mike Scott to name a few) and numerous other overseas professionals laced it up to play in front of the Atlanta crowd. In addition, top college players came out to test their skill against professionals and local hoopers. Players who play in different countries, cities and colleges have a chance to play in front of a home crowd with friends and family present. 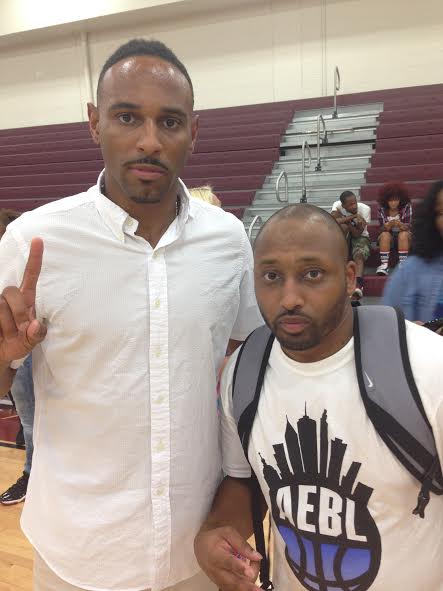 Championship Sunday was an afternoon filled with festivities. The 3pt contest was a shootout that was decided by the last “money ball”. Emmanuel Holloway was crowned the 2015 AEBL 3pt Shootout Champion. The dunk contest was insane as the dunkers pulled out all types and varieties of dunks. Bobby Brown rose above them all the be named the 2015 AEBL Dunk Contest Champion. Next up was the AEBL Celebrity Influencer Game. K Camp, Que and Scotty Atl were some of the celebrities to come out and show what they have on the court. It was great for the celebrities to come out and interact with the Atlanta Community. During the game K Camp donated book bags and school supplies to the kids in attendance. The main attraction of the night was the championship game. Teams played all summer to gain ranking in the playoffs. The playoffs were single elimination games until 2 teams were left to face-off on championship Sunday. Uptown Sounds defended their title and won back to back championships. Lou Williams led his team back to the championship game and brought with him 3 other NBA players in Josh Smith, Mike Scott and Kentavious Caldwell-Pope. It was great for the community of Atlanta to be able to come watch NBA players in action. The AEBL thinks it is important for people who may not be able to watch an Atlanta Hawks game in person to come out and see NBA talent right in their community free of charge.

The man behind the AEBL is Jah Rawlings the CEO. Born and raised in New York City, Jah has been playing basketball since he was 3 years old. Working his way up through the junior circuit and AAU, he signed to go play college basketball at Clemson. Jah ended up attending Georgia Perimeter due to coaching changes at Clemson. From there he transferred and finished up at Lander University. After college he started working in the AAU circuit and with the Atlanta Hawks. Working with the hawks gave Jah ideas on how he wanted to impact the local community. The blueprint for the AEBL has been around for 5 years. It took just two years to come to fruition. In the 3 years of the existence of the AEBL, Jah has made the league into the best pro-am in the city. Atlanta Summers will never be the same with the AEBL gaining more support from the local community and more recognition from the rest of the nation.