For the third time in five years, Alcorn St. of the SWAC met North Carolina A&T of the MEAC in the annual Celebration Bowl, held at Mercedes-Benz Stadium. The Aggies of NC A&T defeated Alcorn St. Braves last year, 24-22.

This year, there were more points as A&T took down Alcorn State 64-44.

Both team’s quarterbacks were Georgia high school standouts. They even played against each other on the high school gridiron.

Felix Harper was a standout quarterback at Creekside High School. The junior from Fairburn is a starter this year for the first time in his Alcorn State career.

Kylil Carter was a dual-threat quarterback at South Cobb and waited 4 years to be a starter for the Aggies.

The game featured 1,034 combined yards, 108 points and 45 first downs. There were seven touchdowns of at least 35 yards, including a 75-yard scoring dash by Jah-Maine Martin to open the third quarter for the Aggies.

49 points were scored in third quarter combined by both teams, a Celebration Bowl record.

After the teams each traded punts two times to start the game, Alcorn St. recovered a fumble and converted a field goal to take a 3-0 lead.

The second quarter had NCA&T taking the lead when senior Elijah Bell ran past the Alcorn State secondary and caught in a 53-yard touchdown pass with 13:03 left in the second quarter. That was good for a 7-3 edge and extended Bell’s school record to 32 career touchdowns receiving.

Alcorn State kept countering as Harper scored on a six-yard run to cap a 10-play, 75-yard drive, NCA&T was quicker to answer when another long pass by Carter found Aggies wide receiver Ron Hunt wide open deep for a 43-yard score and a 38-17 lead early in the third.

The Aggies would continue to roll and put the game away in the fourth quarter.

As is tradition, halftime performances featured the Blue and Gold Marching Machine from N.C. A&T, the No. 1 band in the final ESPN/The Undefeated Band Rankings this season, and Alcorn State’s Sounds of Dyn-O-mite Marching Band. 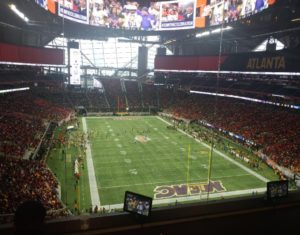