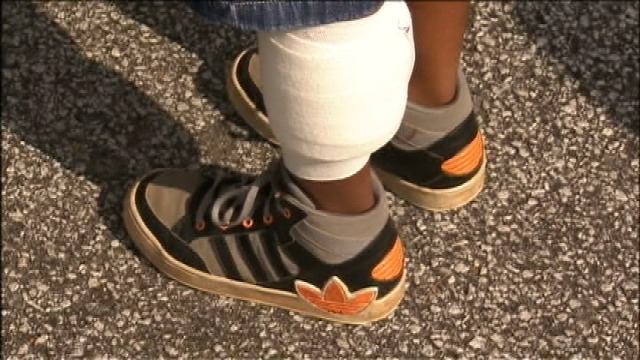 Around 11 a.m., the 6-year-old boys were playing on the Rocky Plains Elementary School playground when the fox emerged from a wooded area adjacent to the school, Newton County Sheriff’s spokeswoman Deputy Cortney Morris said.

“The fox came out of the woods and bit the two children,” then ran back into the woods, Morris said.

“The fox charged one of the little boys,” schools spokeswoman Sherri Davis-Viniard told The Atlanta Journal-Constitution. “A paraprofessional was able to kick the fox to get it away from the student. Then the fox turned around and went after another child.”

Davis-Viniard said the paraprofessional kicked at the animal again to make it run away.

Both boys were taken to a nearby hospital and treated for possible rabies infections, Newton County Animal Control spokeswoman Teri Key-Hooson said. One of the boys was bitten on the leg, and the other had minor puncture marks and abrasions, she said.

School officials alerted the parents of the roughly 50 children who were on the playground, and called sheriff’s deputies and Newton County Animal Control.

“We’ve been here going on 23 years, and nothing has happened like this at the schools,” Key-Hooson said.

This is the season for heightened fox activity because the animals are having their cubs, Key-Hooson said.

“If the den could possibly be in that immediate area, then she might be protecting babies,” she said of the four-legged culprit. “We see domestic animals act aggressive to protect babies. There’s no reason to believe a fox wouldn’t act the same way.”

Animal Control officers set traps and continue to wait to see if the animal is captured. But there are no guarantees they’ll corral the animal.

“Honestly, I don’t know if we’ll catch the same fox that bit the children,” Key-Hooson said.

6th fastest growing city in the US is........Alpharetta