For the third year in a row, Raury & Love Renaissance have brought Raurfest to Atlanta, Georgia. But, for the first time, the crew brought forth a full weekend of activities.

In the past years, Raurfest featured a one-day music festival full of up-and-coming artists along with some of the bigger names. It’s a place where Kendrick Lamar’s “Alright” gets just as much hype, if not more, as Gucci Mane’s “I Think I Love Her”. That event headlined #LVRNWKND (Love Renaissance Weekend) but wasn’t the only thing to look forward to this time around. 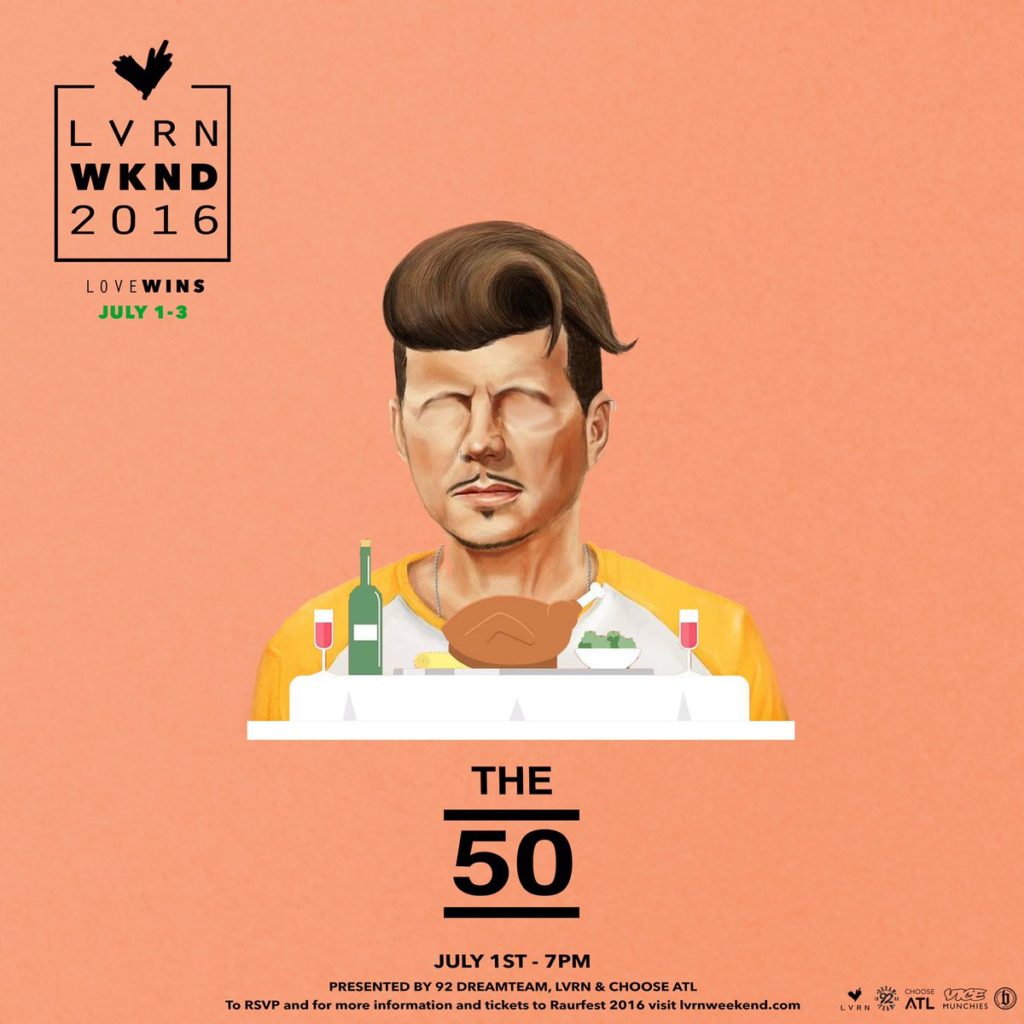 On Friday, July 1 the weekend kicked off with The 50, a networking dinner hosted at Studio No. 7. The dinner brought together a room full of young “creatives” hand-picked by LVRN and their collaborating partners, 92 DreamTeam and Choose ATL. Photographers, artists, journalists, entrepreneurs, DJs and more all gathered around picnic tables that would feature a three-course meal catered by Modest Concepts. Prior to the meal being served, complimentary Pabst Blue Ribbon was served and a photo booth entertained guests. 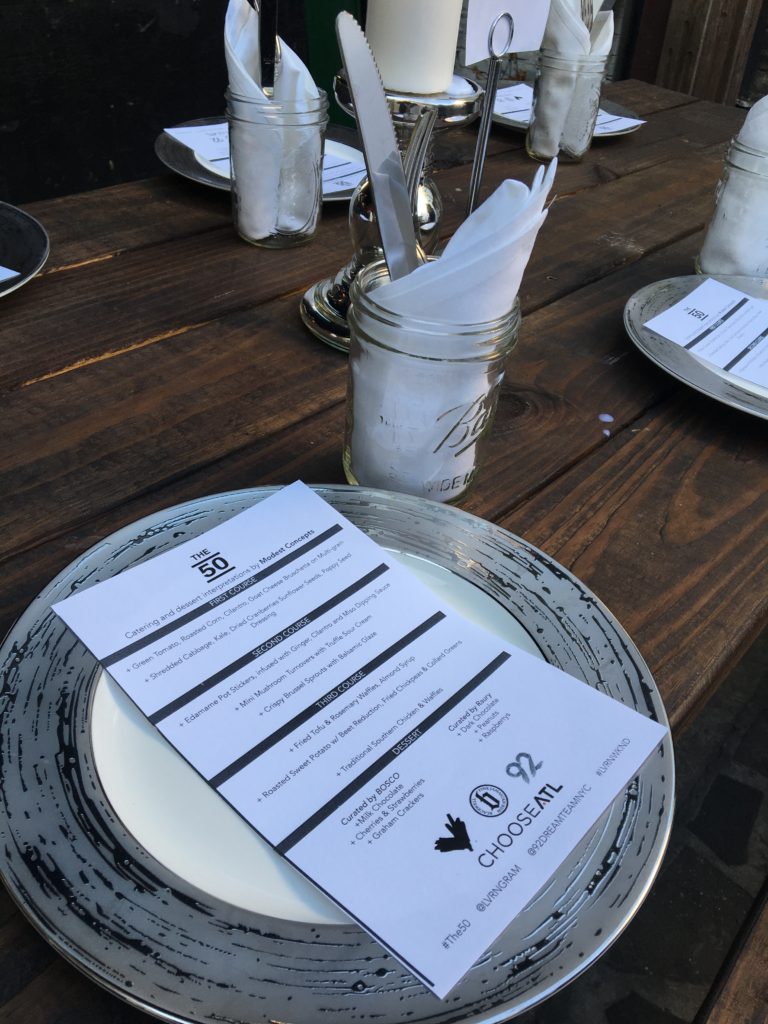 The dinner was followed by an after party at the same location under the name, VAIN.

The next morning, Raury and a small crew of attendees participated in Trill Yoga. Claire Fountain, the leading lady behind the event started Trill Yoga as a hashtag and a personal interpretation of the peaceful practice. So from 10 a.m. until noon, Fountain, Raury and about 20 others filled a room in the M. Rich Building. Fountain created the movement in order to break the stigma that yoga had to be squeezed into this small window of pristine music, and precise, formulaic movement. Attendees and others are encouraged to practice yoga in unconventional spaces, not worry about having a mat and to listen to whatever genre of music they like. This event should’ve been the start of every day. 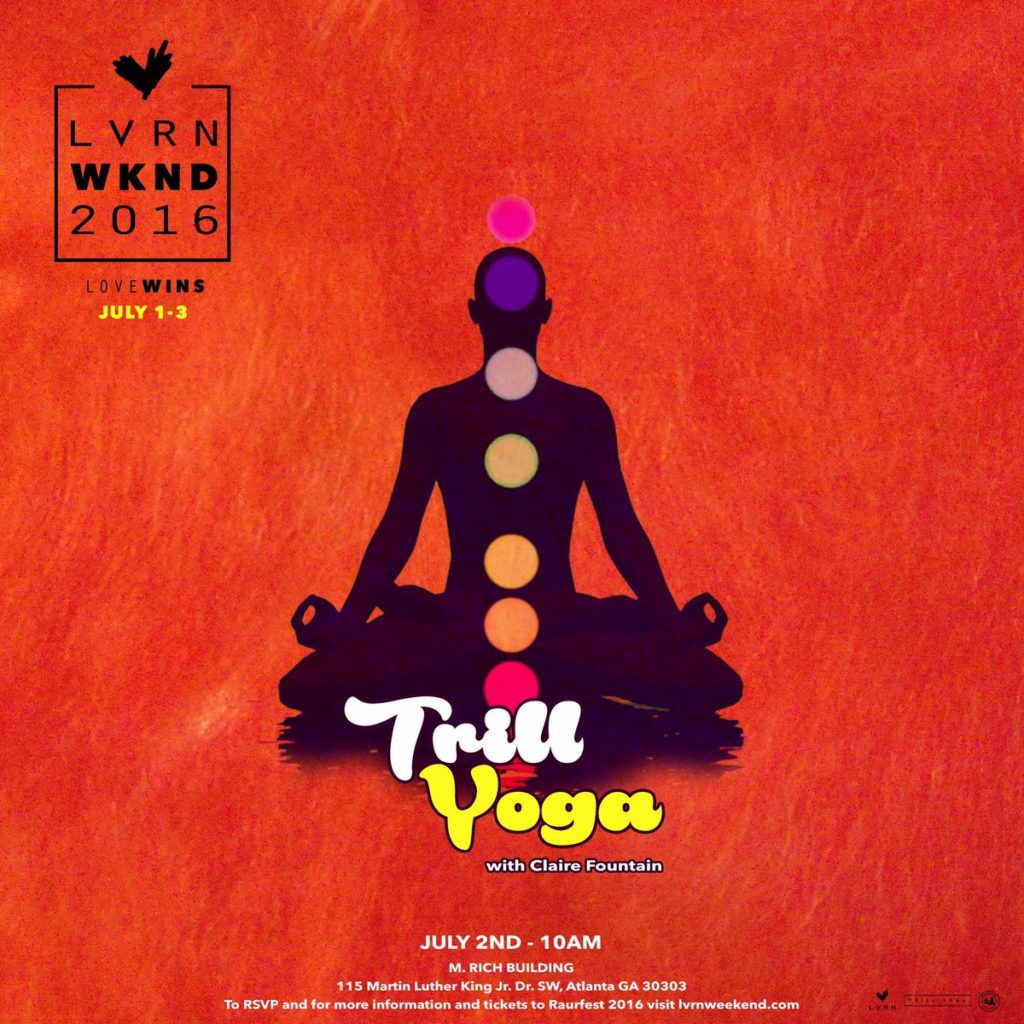 Shark Tank ATL followed a few hours later and opened the door for young entrepreneurs to present ideas and products for potential funding and backing from a panel of “sharks”. As General Assembly in City Market filled up, seven presenters brought their ideas to Aaron Easaw, Ashish Thakur, Jason Riddick and Julie Matos (pictured in order below). 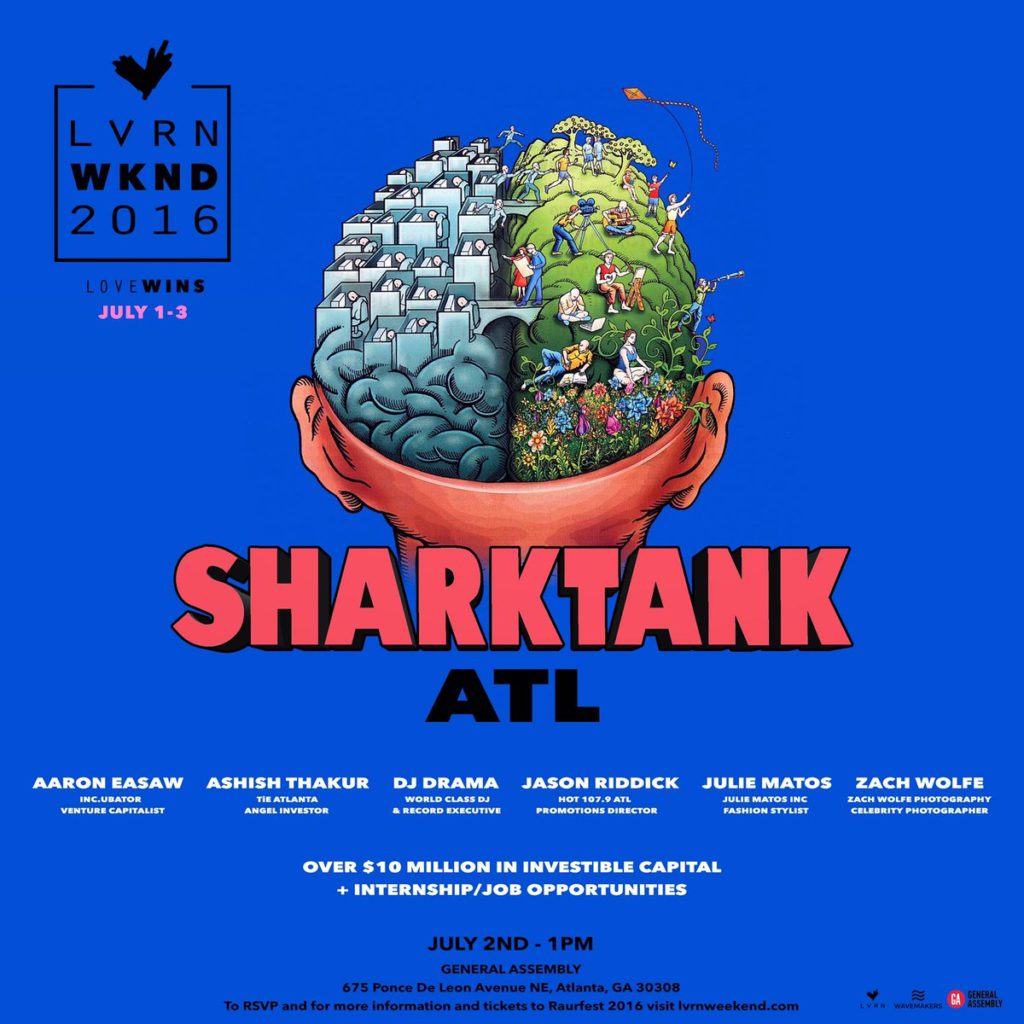 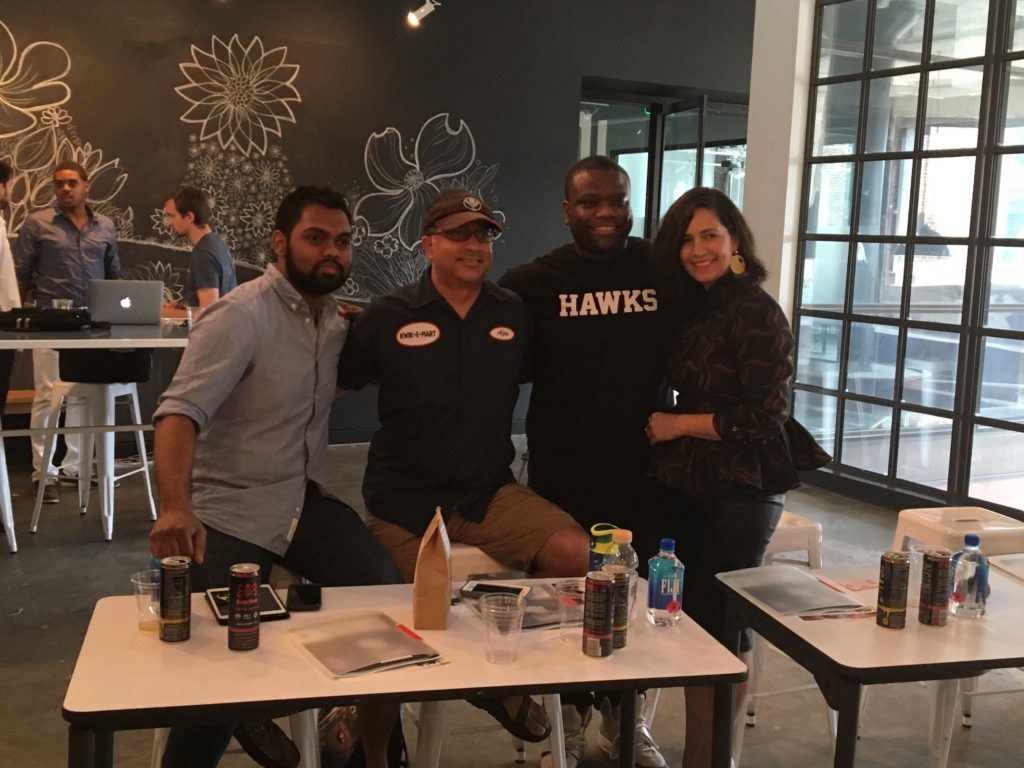 Although the ventures and ideas varied, the creativity and passion among the presenters had a common thread. 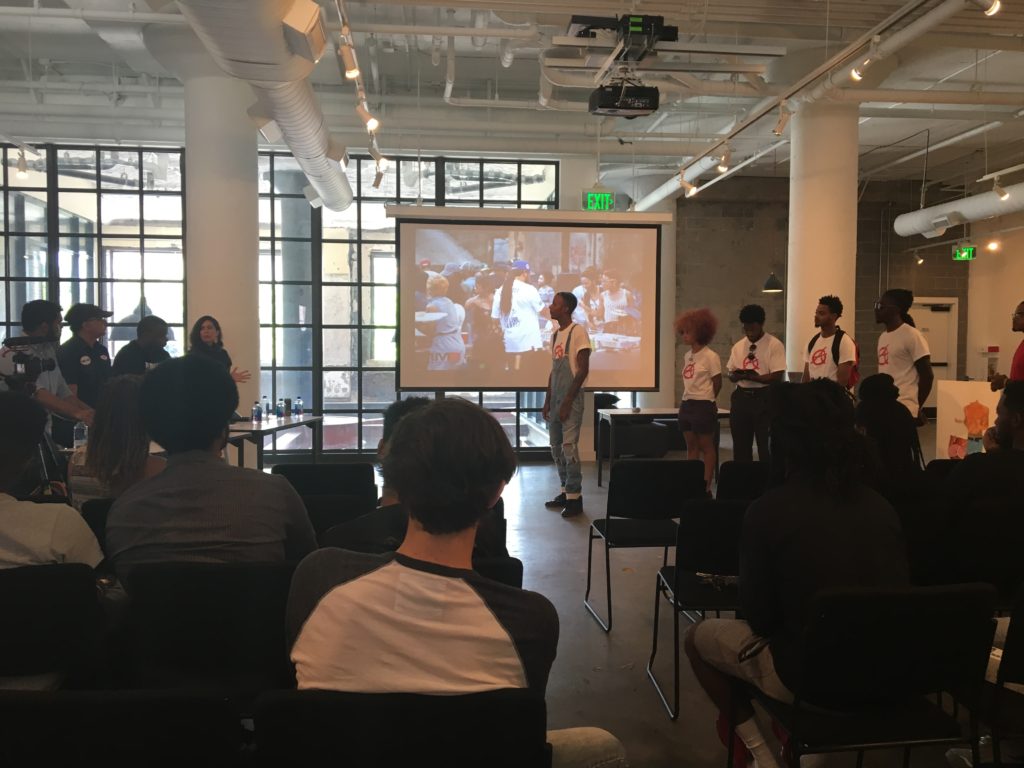 Saturday night appeared pretty swiftly after the leading three events and 5 p.m. opened the doors of Masquerade for one of its last shows at the North Avenue location.

The third annual Raurfest, along with the entire weekend promoted the Love Renaissance mantra, “Love Wins”. Fort Knox, who hosted the festival again made sure the attendees remembered that as he kept the crowd hype and entertained in a way that only he can. While Knox danced, passed out water and interacted with the festival goers, DJ Xavier BLK played an array of hits, old and new. After attending last year, Fort Knox is still one of my favorite parts of the event.

Performances varied this year from a water slinging, crowd surfing, rock performance from Hero The Band to the sultry, esoteric crooning of Kilo Kish. In between, artists like Berhana, Ziggy2Playa, Kodi Shane, Zip Kennedy, Tommy Swisher, Nick Grant, J.I.D. and TRU took the stage. Of the opening acts, Nick Grant may be one of the more noticeable names and J.I.D. was the only returning act from the previous year – with the exception of one other budding star.

In the late hours of the festival, the headliners began to take the stage and owned the moment. Kilo Kish and Lion Babe brought some needed feminine energy to the night being the only ladies outside of Kodi Shane to grace the stage. Similar to last year, Raury opened his set with purpose and passion, this time with “Revolution”, the opening act for his debut album All We Need.

The Indigo Child would perform “Superfly”, “Higher”, “God’s Whisper”, “Crystal Express”, “Her”, “Tears in the Trap”, “Peace Prevail”, “CPU” and end the night with “Devil’s Whisper”. Raury also performed “Forbidden Knowledge” without Big K.R.I.T., although he was seen entering the building. To my surprise, “Friends” didn’t close the show but the set-list was a perfect mix.

In the midst of Raury’s performance, he brought out a few friends. 6LACK, pronounce “black”, who is a new artist aligned to the Love Renaissance brand performed joining J.I.D. as the two returning acts from last year. 6LACK, an East Atlanta native, released four tracks led by the hit, “PRBLMS”. That was also the choice song to be performed in his short set alongside a few freestyles. After that, Joey Bada$$ and Kirk Knight shook the stage. Joey showed off his Pro Era chops with his New York brand of rap with songs like “Big Dusty”, “Survival Tactics” and “Devastated”.

It’s safe to say that #LVRNWKND was a success. At Shark Tanks ATL, Carlon Ramong asked the crowd what they would like to see next come to Atlanta.

At The 50, Jimmy Van Nguyen noted that Love Renaissance is looking to do bigger and better things for the city as a whole.

At Raurfest, Raury encouraged everyone to be themselves and to chase their dreams.

#LVRNWKND was about embracing and exposing creative nature in a variety of formats, which makes a creative hot bed like Atlanta the perfect home for such festivities.