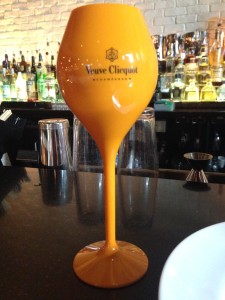 Who would have thought one of the swankiest parties was last night, a Tuesday night!? Last night was the Chefs, Shrooms and Champs celebration at STK. This showcased 6 chefs and sous chefs from 3 of Atlanta’s top upscale restaurants, and paired all of the dishes with two different Veuve Cliquot champagnes. Because what goes better with mushrooms? Champagne!

I stopped by STK, over on 12th street and Peachtree (just a hop skip away from home for me!) and was immediately greeted with a neat champagne glass. Not your typical champagne flute, also a pretty bright color.

I hadn’t been inside STK before, and lavish is an understatement. The lights inside looked like stars, and they were the main source of light, making the atmosphere romantic. The way the celebration was set up was all of the chefs were on the lower level, and there was seating throughout. I came hungry after work, so I went down the line and got my first plate.

Saltyard was the first restaurant team I met with. They had two completely different plates to sample, one was a spring vegetable soup with a mushroom won
ton. The other: a pan roasted scallop with brown butter mushrooms and a cauliflower puree. I first tried the soup, and immediately felt a wave of comfort. The meatiness from the mushrooms made me feel like I was eating a winter soup my Dad used to make. It was a great start to my mushroom adventure.

The second dish was even better, this one was the signature dish from their 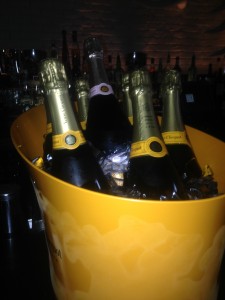 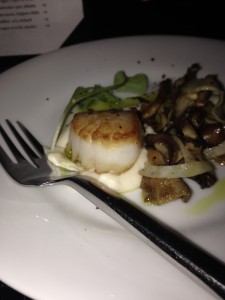 at this event. It came in what looked like an oversized shot-glass and the green color from the fava beans was almost glowing. The panna cotta came with a mushroom salad on top, which you would eat together. It was two polarizing flavors (one bright, the other darker) coming together to create an interesting combination. The texture of the panna cotta turned me off, but I still noticed myself taking bites.

The second dish from the chef was pan seared sweetbreads with a green garlic puree and madeira mushrooms. The first time I had sweetbreads was at The Spence in Technology Square. Definitely an acquired taste, but the sweetbreads were done well here, and the mushrooms were the star of the show. When the chef was describing the dish to me, the first thing he mentioned was homemade bacon and I was sold. Because, y’know. Bacon makes the world go ’round.

The third and fourth plates from White Oak showed a different side to the mushrooms. They included a cured trout with pickled wild mushrooms, and the other was a duck and wild mushroom sausage with a farro salad. Between these two my favorite was the cured trout, personally the sausage didn’t sit well with me. But granted at this point I was getting full.

The last plate showed a toast point with a chicken and mushroom tarrine and an apricot conserva, paired with hangar steak, english pea, mushroom pasta combo. These two tastes were definitely complementary with sweet and savory. I started with the toast point, which to me the tarrine tasted like a pate with mushrooms. I really liked that! The pasta with hangar steak was a great way to round out all of the dishes, the steak was cooked beautifully, and it paired well with the mushrooms, the truffle foam and the peas.

This is definitely a good event for impressing your girlfriend. STK has a great upscale atmosphere, and after a few drinks there’s room to roam and dance.  If I was able to bring my boyfriend with me, it would have been a good date night. Also, it was a nice walk there from Piedmont Park, and not even a block from Cafe Intermezzo!

4 Underrated Bars to Get a Beer in Atlanta