The Fox Theater is once again bringing some classics to its big screen with the 2016 Coca-Cola Summer Film Festival.

The festival had an early start this year with a showing of Purple Rain to celebrate the life of Prince. May 14th marked exactly one month since his amazing performance at the venue, so it was only fitting for the showing to be that day.

This summer’s lineup will celebrate many film anniversaries and a Saturday morning devoted to cartoon favorites. Audiences will also get to enjoy modern and vintage films on the Fox’s 26-foot high x 56-foot-8-inch wide big screen, with the famous starry night above.

As an added bonus this year, fans will have the chance to vote on the ending summer film. Fans can head to Fox Theater Atlanta‘s Facebook page and vote on the nominees.

Attendees can also take advantage of Special Movie Tours before the showings. Patrons will be able to walk through the projection booth and screening room while learning more about the rich history of the now iconic theatre and William Fox’s legacy. 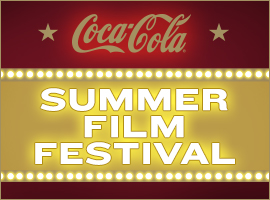 *All showings are at 7:30 p.m. unless otherwise noted

Saturday, May 14 Purple Rain, a celebration of the artistry of Prince