Social media has been the way of communicating now for a while. We communicate with people we know personally and complete strangers. In 2014, we have so many platforms of social media like Facebook, Twitter, Tumblr, Instagram etc. Along with these social medias, people participate in such days as #ManCrushMonday, #TransformationTuesday, #WomanCrushWednesday, #ThrowbackThusday, and #FlashbackFriday. 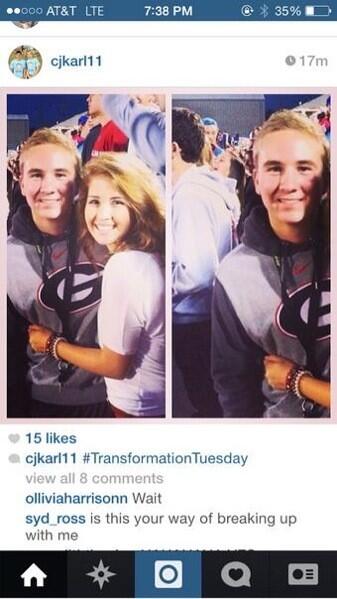 Well this story from Cherokee County has swept the nation. From Media Personalities like Bomani Jones, from ESPN, to the Huffington Post, its both sad for humanity and outright hilarious.

A teenager from Cherokee County was participating in #TranformationTuesday on Instagram and broke up with his girlfriend in the process. On the left side, he has a picture of both he and his then-girlfriend, then on the right side he cut her out of the same picture.

This is, by far, the worst way to be dumped. Let all have a moment of silence for this IG post.