Airshow legends Michael Goulian, Patty Wagstaff, and Buck Roetman headline a field of the nation’s top aerobatic performers set to thrill audiences in the skies over Northwest Georgia, October 13-14, 2018 during the Wings Over North Georgia Air Show. Few air shows offer as much record and award-winning talent on the same stage.

Millions of airshow spectators worldwide have witnessed the ferocity of Michael Goulian’s performance. Following his recent finish in Kazan, Russia, Goulian currently holds the lead position for the Red Bull Air Race series. Every roll, pull, and tumble of his flight demonstration is a deliberate execution of precision. Mike has mastered the ability to convey his message of passion through flight through his aggressive approach to flying. As an air show superstar, he continues to redefine what is possible in the air. The consummate aviator, Goulian continues to push the limits of flying while adhering to strict safety standards.

As a six-time member of the U.S. Aerobatic Team, Patty Wagstaff has won gold, silver, and bronze medals in Olympic-level international aerobatic competitions. As the daughter of a commercial airlines pilot, Patty was no stranger to aviation. She is the first woman to win the title of U.S. National Aerobatic Champion and one of a few pilots to win it multiple times. Her breathtaking performances give airshow spectators an up-close view of the precision and complexity of modern, unlimited hard-core aerobatics. Wagstaff’s smooth, aggressive style sets the standard for performers the world over.

Veteran pilot Buck Roetman’sbright yellow modified Christen Eagle is well known among airshow regulars. Two things set the plane apart from similar aircraft. The first is it’s Lycoming IO360 4-cylinder engine, built by Penn Yan Aero, and pumped up to 250 horsepower. The second is Buck’s 35 years of experience at the stick. He’s flown more than 105 types of airplanes, from Cubs to corporate jets, racking up more than 13,500 hours of flight time. When he’s not thrilling airshow audiences he specializes in aircraft acquisition, fabrication and export as the owner of Wild Horse Aviation.

Advance tickets, camping, sponsor, and exhibitor information is available at https://www.wingsovernorthgeorgia.com. Those seeking the most up-to-date information for the Wings Over North Georgia Air Show should follow the event’s Facebook page for regular updates and announcements.

Led by USAF Chief Master Sergeant (retired) John Cowman, his team of retired veterans and aviation enthusiasts hosts world-class events and seeks to promote and support the US Armed Forces and veteran organizations. 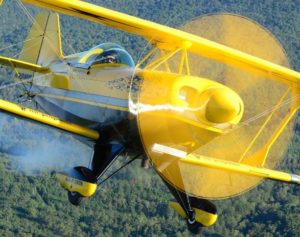