Free Trip to Egypt is a recently released life-changing documentary about an experiment in kindness bringing together people of different cultures and faiths. The documentary takes Canadian-Egyptian Entrepreneur of Muslim-faith Tarek Mounib on a journey into the depths of human connection. The experience is eye-opening as it brings Americans concerned about Islamic extremism to the Middle East.

Tarek Mounib was seeking to build a bridge of mutual understanding, so he reached out to the very people who fear him, making an intriguing offer: an all-expenses paid trip to Egypt. He brought along Adam Saleh, an American-Muslim YouTube celebrity and comedian, to America and they set out across the country searching for potential travelers. Different backgrounds, beliefs and opinions were found as they visited places such as a small town in the heart of Georgia, a Trump Rally in Kentucky, Union Square in New York City and many other locations.

“I was really curious what would happen if we paired up people who had completely different beliefs and political views,” said Mounib. “Growing up I saw firsthand how Islam helped many people connect and live from their hearts, but at the same time I also saw the corruption and bigotry that was done in the name of it, and many other religions. When we were able to come across just a small handful of Americans who were willing to take the quest, I had no idea what would happen but couldn’t have been more astonished by the emotional and important expedition that unfolded. Although we do not all have the same views, I hope this film renews people’s faith in humanity as it did mine.”

Seven individuals were willing to confront their own prejudices and were taken to Cairo, Egypt in 2017. The American participants included a school teacher, a police officer, Marine Corps veteran, single mom, preacher and beauty pageant queen. They spent 10 days paired with locals just as diverse as them, including; a young Egyptian revolutionary, an orthodox Muslim family and a left-leaning journalist. The stories that emerge from the improbable connections formed a provocative, surprising, emotional, and life-changing experience from those involved and those who have watched the documentary.

The makers of Free Trip to Egypt have declared the month of September as the #PledgeToListenMonth as a follow-up their Day of Unity. They have joined together with a range of partners to mark a combined celebration of the International Day of Listening, the UN’s International Day of Peace and the international month of Unity. They will feature hundreds of screenings all over North America, embracing diverse communities, and taking place in venues of all shapes and sizes.

If you would like more information on how you can join the conversation and take the pledge you can visit their website at www.FreeTripToEgypt.com. You can also stay up to date by following them on social media platforms such as Facebook, Instagram and Twitter.

With a goal of launching a sincere dialogue and a better understanding of different points of view, Kindness Films is focused on creating projects that contribute to the wellbeing of humanity and bringing people of various backgrounds and cultures together. A successful software entrepreneur of Egyptian heritage who has lived in Zurich, Switzerland, for the past 15 years, founder Tarek Mounib – who recalls being the only Muslim family in his neighborhood growing up in the ‘70s in Halifax, Canada – launched the non-partisan production company in 2017 with the genesis of an idea: A dream to build bridges through kindness and document the journey in a film. What happened next was beyond his wildest dreams and resulted in a most unusual journey. For more information visit www.KindnessFilms.org. 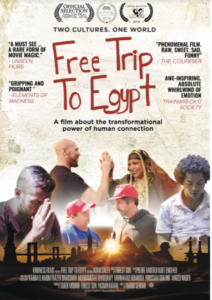 11 Things to Do in Atlanta Area in the Halloween Season

2020 Final Four Coming to Atlanta 'Read All About It'