Yesterday an Atlanta woman posted on Reddit explaining a terrible experience she had with towing company “Stage Ten Towing“. After leaving a terrible review she received an unbelievable text message from the company’s owner. The story is below:

Here’s the story provided by snowwhite394:

I got a flat tire on Bankhead Hwy around 8:45pm on Tuesday night. I pulled over to the side of the road, locked my doors because it’s Bankhead, and called my roadside assistance. I arranged for a “tow, store, tow,” where they tow my car to a storage lot, then tow it to the dealership in the morning. I was given an ETA of 9:38pm as well as the name of the towing company, Stage Ten Atlanta, and a contact number for them.

Come 10pm, they had not arrived. I called the tow company, at which point I was told, in a very rude manner, that the tow truck would not be there until close to midnight. Considering that they would be in possession of my car, I let it go and didn’t fight with them. As instructed, since I didn’t want to sit and wait in that area, I locked my keys in the car and got my roommate to pick me up and take me home. The company was to get my car, then unlock it with an unlock kit in the storage lot to obtain my keys.

Fast forward to the following morning, I call the dealership around 10am and was told my car had not yet arrived. I chalked it up to running behind, and let it go. I arrive at the dealership around 10:45am, still no car. I call my roadside assistance, who tells me they will contact the tow company. I then get a call from the tow company, telling me that the specific driver assigned to get my car is out of contact, and asking the location my vehicle was left at the night before (again, not very nicely). I gave him the information, then he hung up. At this point, my car was lost. My impression was that the tow driver stole my car and ran off. Needless to say, I was panicking.

About an hour later, he called me back, saying he found my car still on the side of the road. So, it had been left on Bankhead for 12+ hours. He brought it to the dealership, it got fixed, I went on my way.
I then went to their website and posted my experience in a review, giving them one star. They responded to the review, very politely. That’s when I got this text message. I assume the owner of the company went into customer records to find my phone number to text me, which I believe is illegal.
And here I am. I reported them to my roadside assistance company, and I will be filing a complaint with the BBB. 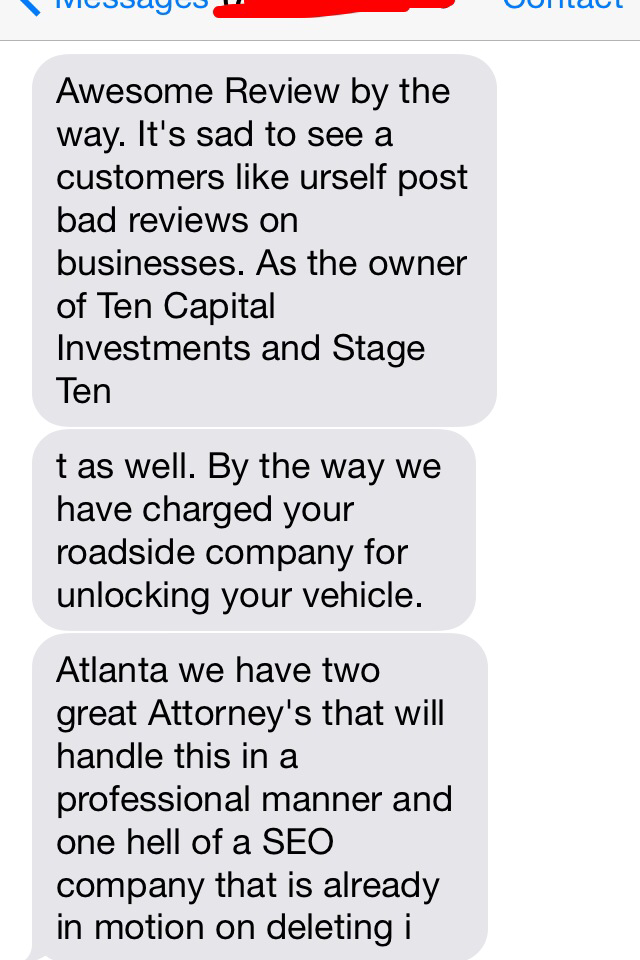 4 Reasons Why Brian Schottenheimer Will Work at UGA