Chick-fil-A is Still The Reigning King Of Fast Food

Georgia is one of those states that is blessed to have multiple delicious food chains nestled all over the state. Ted’s Montana Grill, Moe’s Southwestern Grill, Taco Mac, Waffle House, Mellow Mushroom, just to name a few.

But anyone who lives in Atlanta knows that when it comes to fast food, our pride and joy would have to be Chick-fil-A. The first resturaunt opened its doors in Hapeville, GA in 1946 under the management of S. Truett Cathy. Ever since then their juicy, succulent Chicken Sandwiches (amongst other meals) have become some of the best fast food you can get. It’s been seven decades since the beloved chicken spot opened its doors and it’s safe to say it has exploded in popularity.

The American Customer Satisfaction Index Restaurant Report was released this Tuesday and the results show that Chick-fil-A is currently the most popular food chain in the US, beating out restaurants like Papa Johns, Arby’s, Subway, Chipotle, and McDonalds. 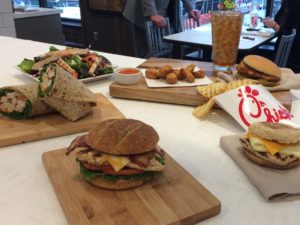 It’s a surprising result considering the fact that, unlike many other fast food chains, Chick-fil-A is only available in a limited number of states with most of them being concentrated in the South East.

Most people I personally know would agree with me that their food is incredible, from the crispness of their chicken to the filling waffle fries, but surely there must be more reason why they are so successful. I’ve always been appreciative of their customer service, but maybe it could also be that the people of the US appreciate their initiatives to give back to the community with their charities, such as Chick-fil-A Foundation.

It’s also likely that the chicken-only fast food chain had a lot to gain from recent health crazes that have deterred some consumers from visiting chains like McDonald’s and Taco Bell.

Whatever the reason may be, the people have spoken. The chicken sandwich masters from the Peach State are on top and it doesn’t look like anyone will push them off the fast food throne any time soon.

3,000 Cases of Sweetwater Brewery of Beer Stolen in Atlanta