Girls Forced into a Van While Walking to School……….By Police?

Going to school in downtown Atlanta is a very different experience, for instance sometimes you might be pulled into a van randomly by police.

Three Atlanta girls walking to school were forced into a truancy van last week, even though they were just 50 yards from the school.

WXIA 11Alive reports that Carrie and Colleen Miller, twins in their teens, normally take the school bus. But on May 4, a substitute driver missed their stop, so they decided to walk the 2.5 miles instead, along with another friend. Just when they had almost reached the school, truant officers confronted the girls and told them they had to get into the MARTA (Metropolitan Atlanta Rapid Transit Authority) van:

“We were just walking and we see a parked MARTA van, and then a MARTA police stops and two men come out. They said, ‘Can you get in the van?’  And we were like ‘Why?’ But they wouldn’t tell us,” Colleen said.

“They were forcing us to get in to the van, it was more like, ‘Get into the van!’ And we were so confused,” her twin sister Carrie said.

The girls recorded some of the back and forth on their cell phones. On the short clip, you can hear a man saying, “Can’t you just get into the van?” 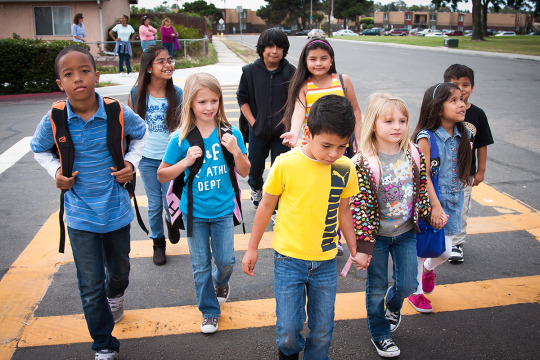 When asked by 11 Alive News why the girls had to be stopped when they were so close to school, Atlanta Public Schools sent a statement:

Atlanta Public Schools works collaboratively with the Atlanta Police Department and MARTA Police Department year-round to conduct truancy sweeps within our school zone. The APS Truancy Office protocol states that ‘APD Truancy Officers and MARTA Police Officers are to transport students to the APS Truancy Center or their APS school from 8:30 a.m. to 2:30 p.m. in accordance with the city ordinance.’

The Atlanta City Ordinance states that students are supposed to be in school during school hours, unless they have a valid excuse. The MARTA police officers clearly identified themselves to the students before transporting them in a MARTA Police truancy vehicle back to school. The school bus driver, who was a substitute driver, missed their bus stop. The students who returned to school were not considered “truant” since they were on their way to school. They were instead classified as “late to school.”

The Miller girls say this was not well explained to them. “We kept questioning them and they would never give us full answers,” Carrie said. What’s more, she was worried about being forced into a van by strange men for seemingly no reason. There is a certain menace to that, of course.

But even though the authorities were, indeed, the authorities, they should not have the authority to ignore the fact their intervention was not only unnecessary but pathetic: The school was right there, the girls were headed toward it, not running away, and if they had asked why the girls were late, an explanation would have been forthcoming.

This is another case of zero tolerance. In this case, zero tolerance for reality. Not a great trait in those given the power to hound our children.