Dignitaries, partners and media were all on hand for Wednesday night’s “Grand Opening” of Hisense’s new product showroom in Suwanee.

It’s all part of making Hisense a household name in America, as it is in other countries around the world. Hisense does $17 billion in sales each year, but according to the CEO, just $1 billion in the U.S.

Hisense has been a global leader in premium television technology and appliances for years and now they announce the opening of their brand-new showroom at their Atlanta based U.S. headquarters. The opening was celebrated with an event where local community members were invited to see the new space, get to know the brand and participate in a raffle to benefit the American Red Cross’s disaster relief fund.

“We are thrilled to have our U.S. home base here in Suwanee, and to celebrate this grand opening with members of the local community,” says Jerry Liu, CEO of Hisense USA. “As our brand grows, we look forward to deepening our ties with the local organizations here, including the Gwinnett Chamber of Commerce.”

Attendees were able to mix and mingle with Hisense execs and representatives, but the stars of the show were the HDTV’s kitchen appliances, air conditioning units and dehumidifiers.

The new showroom measures nearly 5,000 sq ft and was designed to showcase Hisense’s latest technology innovations across the TV and Home Appliance departments as well as the company’s many sports partnerships which include U.S. Men’s, Women’s and Youth Soccer, FIFA’s 2018 World Cup and NASCAR’s Joe Gibbs Racing. The showroom is outfitted with Hisense’s soon-to-launch 100” Laser TV, premium refrigerators, wine coolers, and TVs ranging in size, and show off much of Hisense’s capabilities, including a glimpse of products that may not be on the market as of yet.

Liu made it a point to say they are looking to develop deep roots in Atlanta and want to help the community. In a sense, Hisense and Metro Atlanta will feed off each other.

“Metro Atlanta is the tech hub for the southeast U.S., which is why Hisense chose the region for their Americas headquarters over a decade ago,” says Nick Masino, Chief Economic Development Officer – Partnership Gwinnett. “We are thrilled to have Hisense here, contributing to that, we look forward to working with them in the years ahead and for their continued success and growth.”

Hisense USA resides in Atlanta, however the multinational company sells products in over 130 countries, with a global headquarters in Qingdao, China. Hisense is well known as the world’s third largest TV manufacturer and the number one television manufacturer in China for over 14 years and is now aggressively expanding in the United States. Hisense televisions and appliances, which offer premium technology at accessible prices, have been well-received by U.S. consumers and the company achieved its most successful sales month ever in Q2 2017.

In addition to their Atlanta home, Hisense has has three R&D facilities across North America in San Jose, CA, NJ and Toronto, Canada; business offices in Toronto and Mexico City, Mexico and a production facility in Rosarita Mexico. 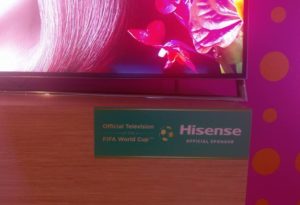 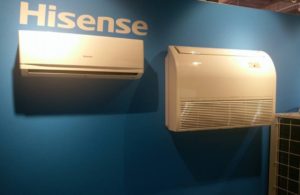