You’ve seen the yellow and white Atlanta Checker Cabs all over the city, but Atlanta’s oldest taxi cab company is cooking up something special, as it’s owner is winning awards of his own, outside the transportation industry.

Walk around Memphis early in May and you will detect some of the best BBQ scents you have ever had the pleasure to sniff.

It’s where Atlanta Checker Cab owner, Rick Hewatt, part of 3 Taxi Guys, will be found, looking to add another trophy to his team’s collection.

World renowned as the home of the blues and the birthplace of rock ’n’ roll, Memphis, Tennessee, is a city just as famous — if not more so — for its eats as its music. The Bluff City is thought of as barbecue capital of the world and known internationally for its unique barbecue style.

The 3 Taxi Guys and their pitmaster, Hewatt, affectionately known as “Ricky Bobby” have been competing at Memphis in May World Championship Barbecue cooking contest, for the past four years. Their results are impressive, finishes in the top-10 every year. They include a ninth in 2015, a second place in 2016, sixth in 2017 and now third in 2018.

Hewatt says that he and his team are no strangers to competing on the big stage. They have won and places in numerous competitions around Georgia and the South.

“Before (this), I cooked on a two-time World Champion BBQ competition team, The Shed, out of Ocean Springs, Miss.”

But Hewatt and his squad point to Memphis each spring as a measuring stick and their “Super Bowl.”

Memphis is the home of the Memphis in May World Championship Barbecue Cooking Contest (WCBCC for short). Created 40 years ago, this event was celebrates barbecue around the world. Nowadays hundreds of teams compete annually for the coveted title of World Grand Champion. And this pig-centric event is a really big deal! One of the top barbecue cooking contests of its kind, this event draws competitors and pork-loving aficionados from around the globe.

“This year there are more than 250 teams. The number of states and countries represented varies year to year, but this year there are teams from 25 states and 6 countries, including Mexico, Canada, Norway, Japan, England and Colombia,” says Robert Griffin, Memphis in May International Festival Director of Marketing.

“The World Championship Barbecue Cooking Contest reinforces our city’s heritage and reputation as the global capital of barbecue cuisine, attracting competitors, media and patrons from across the country and around the world each year,” says James L. Holt, President & CEO of Memphis in May International Festival. “Part of our mission to ‘share Memphis with the world’ includes sharing its culinary trademark — barbecue.”

For competitors, participating in the WCBCC is a labor of love. It takes lots of planning, testing, man power, time and money to participate in this world-renowned competition. First teams must qualify at a sanctioned event throughout the year. Pigs and equipment need to be ordered, sauces and dry rubs perfected. And that’s all before load-in begins.

Hewatt, who’s family has operated Atlanta Checker Cab for over seven decades, admits it’s a lot of work, but it’s part of who he is.

“I am a native Atlantan and have been cooking whole hogs all my life since I was about 15 years old. It’s what I do away from work, and it’s team building, takes talent and is a ton of fun. Plus the end result is pretty good to eat.”

Hewatt is so serious about their craft, that they have been bottling their sauces and selling to the general public. Created by the three guys who own taxi companies from Pittsburgh, Atlanta and San Francisco, the sauces and rubs are great on chicken, fish, lamb, beef and of course, pork.

Hewatt and his buddies may have the general public eating out of their hands, but at competitions, it’s the judges that must be impressed. Not only do their skills get observed, it’s also about taste and presentation. After days of cooking, on Saturday the winners for Memphis in May’s World Championship Barbecue Cooking Contest were revealed. The highlight is revealing the winners of the rib, shoulder, and whole hog divisions. Even the judges are trained.

“Memphis in May now conducts one class each year in November. It’s a day-long class teaching you about the various cuts of meat and how to identify them, what to look for in a perfectly cooked sample of each, and how to properly score it in each of the judged categories,”says Ron Childers, who has been judging barbecue for 18 years.

The 3 Taxi Guys will be making some local stops throughout 2018, so look out for a smoker/grill disguised as a taxi cab- it’s the only one!

“We are proud and I’m proud to represent Atlanta, adds Hewatt. “The 3 Taxi guys have won many awards for our sauces and rubs and they are available at www.3taxiguys.com. 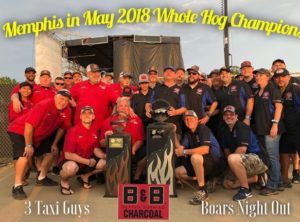 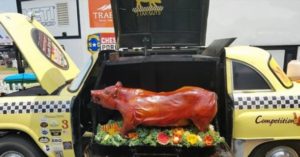 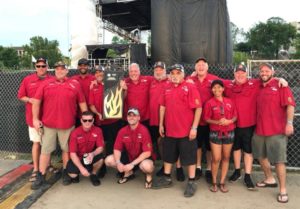 Kroger is giving away free school supplies to Teachers in Georgia