Already widely considered a work of art when it comes to sports and entertainment venues, Atlanta’s Mercedes-Benz Stadium and one of its inhabitants, the AT&T Perch, welcomed on Friday a new “masterpiece” designed by young Atlanta artist Faatimah Stevens.

The massive 20 foot by 24 foot mural is intended to serve as a “cultural touchpoint” – bridging Mercedes-Benz Stadium, its Westside neighborhoods and the entire city of Atlanta. It will reside for one year in the AT&T Perch, located on the second level of the stadium, and then will be auctioned off in late 2019 – with all proceeds to benefit a Westside Atlanta community organization yet to be announced.

“The AT&T Perch in Mercedes-Benz Stadium is something we consider much more than sponsored real-estate. It represents the intersection of technology and entertainment,” said AT&T Georgia President Venessa Harrison. “Today, we are excited to extend that connection to include a celebration of cultural diversity, the arts and – of course – our great city of Atlanta.”

Also of note, Stevens has lived in Atlanta for many years, pursuing her education at Atlanta College of Art and completing a BFA in Drawing, Painting & Printmaking at Georgia State University in 2011.

“AT&T selected me to share my creativity and my story. Being very familiar with this neighborhood I so love and embrace, there could not have been a better platform to showcase my value to this city. Within this grand stadium, on the AT&T Perch, I am able to transport an audience to the area I lived in for many years and the roads I’ve been on too many times to keep count,” said Stevens. “This means more to me, especially, because as an artist I grew and developed here. So, it was necessary to share the new growth and development that is happening before us now.”

“Not only was I presented a historical landscape to honor, I could incorporate the new innovations happening. The Mercedes-Benz Stadium is becoming the epicenter of this neighborhood. Nestled within the crossroads where MLK Jr Drive and Northside meet, those of us that know Atlanta, recognize these names; especially Joseph E. Boone BLVD or Vine City. I could visually place those landmarks into a vibrant and vast composition. So, I imagined the cityscape suspended above us. And standing 20’x24’ feet, this wall made that possible,” Stevens continued.

The next time you are in Mercedes-Benz Stadium, the mural is worth a look. 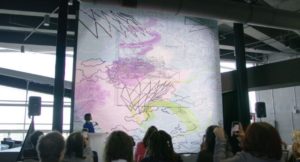