Marijuana. It is a hot button topic in Georgia about the types permissible, legalization and the use of it. The old stigmas are slowly starting to fall away, but a state lawmaker is looking to address another issue.

Yesterday, Senator Harold Jones, II, D – Augusta, held a news conference at the Capitol to announce the filing of Senate Bill 254. The bill, if approved, would change possession of any amount of marijuana to a misdemeanor in Georgia. Current law treats possession of less than 1 ounce of marijuana as a misdemeanor, punishable by no more than 1 year in jail and a $1,000 fine. A conviction for having more than an ounce can amount to a felony with years behind bars and loss of governments benefits and rights. 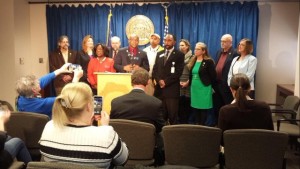 During his press conference Jones reiterated that the SB 254 will not legalize/decriminalize marijuana and people caught selling would still be charged with a felony. His worry is that a felony drug conviction can ends certain government benefits, the HOPE Scholarship, professional licenses, the right to vote and eligibility to serve on juries.

As long as it is for your personal use, SB 254 would not limit the amount of marijuana in a person’s possession. Jones has not heard from Governor Nathan Deal, but notes that he has a lot of support for the bill.

What are your thoughts on Senator Jones’ SB 254? Let us know in the comments below!