DEKALB COUNTY, Ga. – White supremacists had planned on capitalizing on the international attention drawn to Atlanta during Super Bowl LIII to stage a rally at Stone Mountain next February, but the state body that oversees the park said no.

Calhoun and Estes were among those behind the original Rock Stone Mountain, a 2016 “white power” rally that drew a handful of Confederate flag-waving white supremacists and hundreds of counterprotesters who clashed with police for hours, eventually shutting down the park.

“Based on the previous violent event held by your organization on April 23, 2016, as well as your acknowledgement of potential violence in the permit application comments, the Stone Mountain Park Department of Public Safety does not have the available resources to protect not only the members of your organization but the Park employees and general public,” Association CEO Bill Stephens wrote.


News of the park’s decision coincides with the annual release of the FBI’s hate crime statistics which show a 17 percent increase in bias crimes in 2017 over the prior year. The new report tallied more than 7,000 hate crimes, more than half of which involved racial prejudice. It was the third straight year of increases in bias crimes, the FBI reported.

In their application, Calhoun and Estes described the event as a “nonpartisan gathering … to call attention to the efforts of the extreme left and Communists to remove history and monuments of the American people. This includes the NAACP seeking to remove the Stone Mountain carving.” 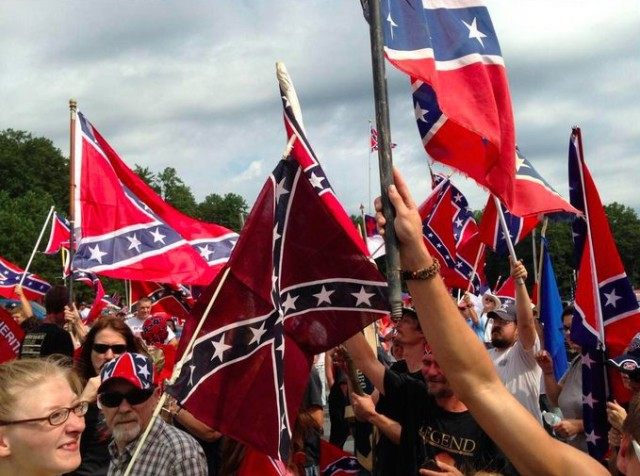 Calhoun is a Cedartown resident and self-admitted member of the Ku Klux Klan. Estes is a white supremacist with a history of arrests and imprisonment for offenses ranging from shoplifting to burglary to stalking. Both men have been involved in protests at Stone Mountain since the 2015 massacre of black church members in Charleston by a white supremacist put the Confederate flag and memorials in the cultural cross hairs.

In posts on the internet, the organizers of the rally make their racist beliefs clear. To join a closed group for rally organizers on social media platform MeWe, applicants must answer whether they are “interested in securing the existence of Our People and a future for White children?” The question echos a slogan known as the “14 words,” attributed to violent white supremacist David Lane.

Stone Mountain was the scene of a series of protests from August 2015 through April 2016 that became both smaller over time and more radical. The first Rock Stone Mountain in 2016 was the culminating event.


That rally was organized explicitly as a white power event, paired with a march that same day in Romeorganized by the neo-Nazi National Socialist Movement.

But while hundreds of supporters had signed up to attend, only a handful actually made it to the park.

Instead, the rally was inundated with counterprotesters, including civil rights organizations, Christian peace activists, and masked anti-fascists groups, popularly known as “antifa.”

The latter group openly clashed with police who formed a cordon to keep the sides separated, throwing rocks and setting off fireworks. Rather than posing before the park’s iconic carving, the white supremacists were corralled in a distant parking lot for their protection.

Tensions were so high, park officials closed the park to tourists for much of the day.

That experience apparently was in mind when Calhoun and Estes applied for a permit. In an attached sheet, the pair asked that the starting and ending times for their planned rally be “concealed until the day of the event in order to avoid lawless attempts to block traffic by Antifa and other groups.”

Stone Mountain association spokesman John Bankhead declined to comment on the event, saying the permit denial letter spoke for itself. Calhoun and Estes did not return calls seeking comment and as of Tuesday they had made no comment about the denial on any of their social media pages.

Much of the inspiration for the proposed rally appears to have come from the candidacy of Democratic gubernatorial candidate Stacey Abrams. In 2017, Abrams called for the removal of the Confederate carving, which features Robert E. Lee and two other major figures of the Confederacy. During the campaign, Abrams softened her tone, calling for an “authentic conversation” about the carving and its meaning.

An activist group called Atlanta Antifascists broke the news about the denial Monday, publishing the denial letter on their web page and social media channels. Because the event hasn’t been canceled on Facebook, the group warned its activists to remain prepared to counter protest.

“Since it is possible that the event’s Klan and white supremacist organizers may try to proceed without a permit or make other plans for the day, we are still asking all anti-racists and community allies to be ready to respond on February 2,” the group wrote.

This article was written by Chris Joyner, The Atlanta Journal-Constitution.