Are Alligator Attacks on the Rise in Georgia?

Shortly after the tragic death of a 2-year-old boy visiting Walt Disney World, concerns of a rise in alligator sightings has plagued several communities.

The young boy was visiting the park with his family when an alligator attack led to a fatal end and caused many to question why there were no signs warning of alligators in the area.

Since then, social media feeds have become filled with news about alligator sightings with some users uploading their own images and videos of their own personal run ins with the large reptiles.

Here in Georgia, the same concerns are prevalent amongst residents. Recently, several alligator citing’s have been reported in Georgia. The beach section of the Reed Bingham State Park in Adel, Georgia was recently closed as a trapper was contacted to locate an alligator. Three other alligators were also removed from the same park at a previous date. In June, an alligator was captured off the coast of Georgia in the Tybee Island waters. The alligator was estimated to be 8 to 10 feet long.

Some of these citing’s are attributed to people feeding alligators, causing them to associate humans with food. This also causes the alligators to become more comfortable in approaching humans.

But with all that being said, are we really more at risk of being alligator lunch? The answer, thankfully, is no.

Since 1980, only one fatality and eight alligator attacks have been recorded in Georgia. This information comes from a Valdosta Daily Times article where Georgia Wildlife officials believe that the likeability of a surge of attacks are unlikely to occur.

Although citing’s are being reported, there is no actual evidence to confirm a rise in alligator attacks or sightings.

However, it is important to know where alligators are most prevalent.

The President of Southeastern Reptile Rescue, Jason Clark notes “When you are in Florida, or in Georgia south of the fall line, you are in the range of an alligator, and when you are next to a body of water, you are in the habitat of an alligator.” Clark also spoke with the Valdosta Daily Times about his fear of the Disney attack possibly attributing to the removal of alligators from their natural habitat. 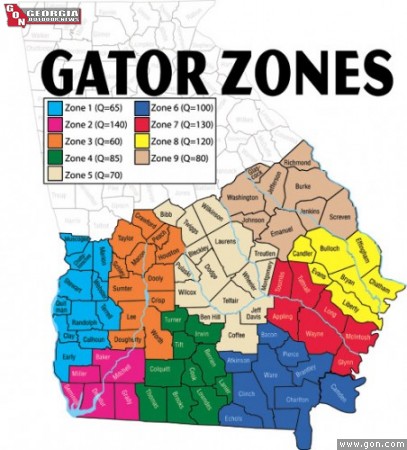 According to the Georgia Department of Natural Resources,  “Alligators are important in nature. They help maintain the population balance of certain prey species and they help shape and modify habitats.”

As you travel this summer to the coast or swampy areas, educate yourself about the site and speak with site advisors concerning any alligator questions. Refrain from feeding alligator’s and if an area seems suspect, use personal intellect and vacate the area.