Southbound traffic on I-75 as seen from Allgood Road, south of the I-575 merge. Credit Bob Andres AJC bandres@ajc.com

Any Atlanta native has come to expect delays and backups on certain stretches of Georgia highways, but it seems like there are few areas more frustrating and disastrous than Interstate 20 between Lithia Springs and downtown Atlanta.

When it comes to sparking road rage, using rough terrain and potholes to tear cars apart, confusing the hell out of drivers or eliminating all functionality of a fast lane, this stretch of highway just might be the reigning king.

“There is not one interstate that we get more complaints about than I-20 between Six Flags and I-285,” the AJC wrote. “For starters, the I-20/I-285 interchange in Fulton County has a strange design that causes some ramps to merge in and exit from the left lanes, which is confusing and also slows the fast lanes. Also the I-20/eastbound ramps to I-285 routinely stack up as people weave over at the last second to take those ramps on the right hand side. It’s a mess.”

A mess indeed but, hopefully, a mess that GDOT can handle—and they are ready to attack this mess at all sides.

Lane closures have already started plaguing the area as crews are preparing to give I-20 the nearly $40 million facelift it so desperately needs. 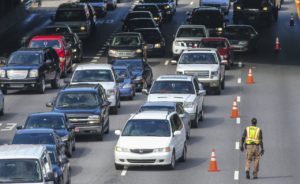 Enhancing safety is always a top priority but the real plus for most Atlantans is that the delineators could potentially keep traffic flowing and cut back on those irritating delays.

And for anyone else out there in the city driving around in a car that’s nearly 20 years old and can’t afford to hit another pothole that seems deep enough to convert into a small kiddie pool, there is great news for you too. The whopping $40 million price tag for the project includes fresh, new pavement.

Atlanta’s highways are some of the busiest in the nation, and it definitely shows, but such high traffic volumes make it difficult for crews to properly patch up the roads and keep your commute free of any major bumps and jerks. A complete resurfacing seems like nothing short of a commuter miracle.

But all the jolly news comes with a catch… and one that you probably already saw coming and experienced over the last two weekends.

The lane closures necessary to get this work done will certainly put a damper on travels for a while and will leave commuters feeling even more frustrated than usual if they don’t plan their trips carefully. In the end, however, it could potentially help solve traffic woes along one of the most frustrating stretches of highway in the entire state—so it could ultimately be worth the temporary inconvenience.

Or at least we hope so.

Another UGA Player Arrested, this Time it's DB Juwuan Briscoe

Remembering Prince and the Last Days of his Life