The 2016 VW Beetle is not quite athletic enough to best a Golf GTI. It doesn’t have a world of customization options, so it’s not really a direct threat to the Mini Cooper. And being a coupe, it’s not meant to be practical, either.

So while I enjoyed my time in my quirky, sandstorm-colored Beetle this week, I found myself wondering: what ARE you?

Then, as I peeled out at a green light on Peachtree and the turbo-four roared us forward, it dawned on me. The 2016 Volkswagen Beetle is the hipster Mustang. Here are 5 reasons why: 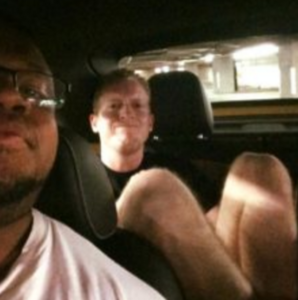 Self-explanatory. The VW Beetle is, and has always been, a coupe, with ample room for two up front and two in back, provided the latter pair are children who don’t mind having their little knees squished. Here I am with my friend James, who’s also 6’3″, testing the backseat of the Beetle.

Thankfully, VW don’t misleadingly label the Beetle a true sports car (like some others), but they’re unabashed in calling it “sporty” on their main site. And they’re right; it has ample handing better than your average budget coupe or sedan, an aerodynamic design (not surprising since Ferdinand Porsche sculpted the original), and good pickup. But it doesn’t blow away in any category, making it distinctly… Mustang-y.

3) It Has a Fresh, Masculine Style

Remember the old Beetle? The adorable, bubbly jalopy sits squarely in the pantheon of Cars Men Would Rather Be Hit By Than Caught Driving. The new one is different; lower, more aggressive, and distinctly hot-rod-like.

You can also tell a lot about a car’s original inspiration by its limited-run special editions; they’re the automaker’s way of saying “this is the car we wanted to build if we didn’t have to worry about wide market appeal.” In the Beetle’s case it’s the edition I’ve been driving this week: the Dune, which features, among other things, a more aggressive grill and a big rear spoiler. Sound familiar? 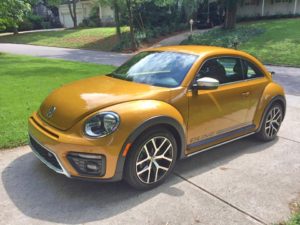 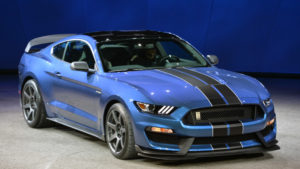 4) It Has a Loud, Capable Engine

Gotta hand it to VW group to mate a capable engine to a responsive automatic transmission. The two work seamlessly together to provide thrilling low-end torque, even if it tapers off for a tepid 0-60 time of 7.4 seconds. Still, the brilliant engine may be the Beetle’s best quality, providing both ample kick around corners and polar bear-friendly MPG; distinctly reminiscent of the 2.3-liter EcoBoost engine in the entry-level Mustang.

5) Nobody Really Buys it Outside of America

I could postulate why (impracticality, large for a city car), but the bottom line is this; some months, Americans buy more Beetles than the entire European continent combined. Like pizza and war, we’ve taken the Beetle and made it our thing. Now, the Beetle may not be a gun-slinging, Bud-chugging patriot like the Mustang, but it has become the de facto mode of transportation for a species unique to our own ecosystem; the affluent urban hipster.

My overall thoughts on the 2016 Beetle are that it’s evolved gracefully, pulling a reverse Caitlyn Jenner and becoming ever-so masculine without losing its roots. Those in the market for a quirky two-door should take it for a spin to see if its unique, mustang-y feel is for you.