Bad news for Atlanta’s city council and their beloved streetcar….

News only recently surfaced that the city of Atlanta was seeking a whopping $500 million grant in order to expand its new streetcar, but if ridership is any indication of overall support for the project the city is in trouble.

Let’s face it, the streetcar wasn’t necessarily a project that was welcomed with open arms from everyone and its rough first run introduced even more doubt that the streetcar was worth the millions that was poured into it.

Well, the locals have spoken… and they don’t think the new attraction is worth their personal coin either.

Ever since 2016 hit, Atlanta Streetcar ridership has been on a downward spiral and there are no signs that it will bounce back any time soon.

“Ridership has plummeted in each of the first three months of 2016 to the lowest levels since the troubled, $98 million project launched 15 months ago,” the AJC reported.

The new year didn’t just mark the beginning of a serious drop in riders though. It also marked the first time that it would cost everyone $1 to ride the streetcar.

Before January 1, it was completely free to hop on board the streetcar and take a trip around the nearly 3-mile loop.

Opening day of the project was exciting enough and since then the streetcar has certainly garnered some fans, but that support didn’t seem to be strong enough to convince people to hand over a single dollar when they wanted to take a ride.

Ridership is reportedly down 48 percent in the first quarter, which would cause anyone to wonder why a failing attraction needs any additional funding…especially to the tune of $500 million.

But is it really just a $1 ticket price that’s behind the streetcar’s demise? Probably not. 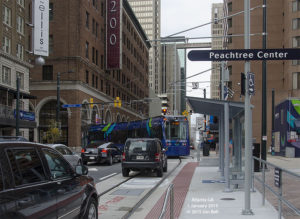 For many locals, the streetcar was rumored to be an open air vehicle that would bring a San Francisco-style flair to the southern capital. Once a large MARTA bus on a wire was revealed, it proved to be a huge disappointment.

“I really thought it was going to be a cute idea and be a cute trolley kind of thing or something,” Riley Haynes, a lifetime Atlantan, told GAFollowers. “It feels too much like a train or a bus…I don’t really get it.”

To make matters worse, some locals feel like the streetcar lacks just as much functionality as it does visual appeal.

“I mean, where are you really going on the streetcar,” Haynes added. “It’s not like you can hop on it and go to work or something. Unless you want an easy way to make it to class (at Georgia State University) or just want something to do for a dollar, I don’t think it makes sense.”

It’s a harsh critique, but not a sentiment that is shared by everyone.

Atlanta Magazine’s Rebecca Burns recently praised the streetcar for its convenience and hailed it as a solution to parking woes in the crowded city.

“It’s less stressful than driving and infinitely less taxing than dealing with downtown parking,” she wrote. “On the streetcar, I can catch up on email, read articles for work and keep up with Twitter.”

If anyone else feels the same way about the street car, they might want to speak up…and by speak up, I mean convince everyone else that the streetcar is worth the investment.

If not, Atlanta’s latest mass transit project may never be given a fair chance to be something truly useful and entertaining for locals.

Another UGA Player Arrested, this Time it's DB Juwuan Briscoe