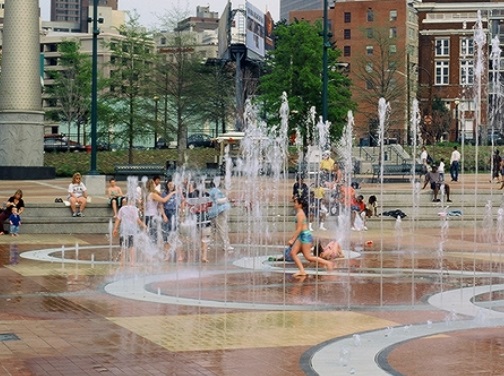 A lot has happened in the last 20 years. That is when Atlanta hosted the 1996 Summer Olympic Games and the city of Atlanta was introduced to Centennial Olympic Park. Just like your home, after 20 years of use, improvements and changes are needed.

This will be part of the GWCCA’s 2020 Vision strategic plan, and AT&T’s support will help make that vision a reality by funding catalytic projects within the green space.

“We are proud to continue our investments in this vibrant community and to work closely with our friends at the Georgia World Congress Center Authority to breathe new life into the Centennial Olympic Park,” said Bill Leahy, president of AT&T Georgia. “Twenty years ago, our fiber-optic infrastructure helped connect Atlanta to the world, and today, through our continuing investments in the community and in our fiber-optic network, our more than 17,000 employees in Atlanta are enhancing opportunities to connect to this unparalleled community.”

The city is on board with the investment in Downtown Atlanta; even as a new football stadium is being built steps from the iconic park.

“The vision that the Georgia World Congress Center Authority has for Atlanta connects the historic importance of Centennial Olympic Park with a future of community growth and vitality,” said Atlanta Mayor Kasim Reed. “AT&T has long shared and supported that same vision for our community, and I appreciate their support – and the support of the entire business community – in making the future promise of our city a reality.”

Today, this unique 21-acre park performs a dual mission: it serves as Georgia’s lasting legacy of the Centennial Olympic Games and it anchors efforts to revitalize residential and commercial development in the heart of Georgia’s capital city. Centennial Olympic Park has become the center of a dynamic downtown entertainment district, a place where residents and visitors have fun, feel safe, and create lifelong memories.  New museums and attractions, as well as significant commercial and residential development, have contributed to an urban renaissance around the park—boosting the economy with more than $2.4 billion in new investments to date with another $1.5 billion in the pipeline.

This is AT&T making an investment in Atlanta, as they have done so many times over the years.

Serving as the Park’s caretaker, the GWCCA is committed to ensuring that Centennial Olympic Park continues to enhance the quality of life in metro Atlanta for decades to come. GWCCA leaders have developed an exciting 2020 Vision that sets a course for the next five years as Mercedes-Benz Stadium opens and more people come to enjoy Downtown Atlanta.

The will also be a new on-campus hotel is developed adjacent to the Congress Center’s Building C.  As part of this campus-wide vision, GWCCA is preparing for significant improvements to Centennial Olympic Park— including many projects designed to increase community access, expand programming opportunities, and greatly enhance the visitor experience. These projects include adding additional greenspace, creating a pedestrian plaza, revamping the park’s popular amphitheater, creating a bike depot in conjunction with the PATH Foundation, and opening up the Baker Street corner to neighboring attractions.

AT&T Aspire is AT&T’s signature philanthropic initiative that drives innovation in education by bringing diverse resources to bear on the issue including funding, technology, employee volunteerism, and mentoring. Through Aspire, we’ve passed the $250 million mark on our plan to invest $350 million in education from 2008-2017. 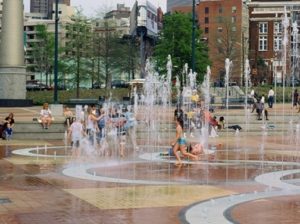