When Callie’s Hot Little Biscuit’s Atlanta outpost opened its Virginia Highlands’ doors in December 2015, it was the culmination of months of hardwork and decision-making and determination by Carrie Morey, who opened the first Callie’s Hot Little Biscuit in Charleston in July 2014. With the success that she experienced in Charleston it would be no surprise if she’d immediately begun thinking of ways to expand but in fact, it took many months before another location seemed possible. “I didn’t even think about an expansion of another Hot Little Biscuit until we were in what I call the smooth sailing ship with the Charleston bakeshop. Once I felt confident that I could leave the Charleston location for an extended period, I began to daydream cities and started making lists!”

Atlanta was on those early lists, but seemed more like a daydream that a realistic possibility for HLB’s second locale. That all changed when Morey got a call from a family friend who knew about an Atlanta space that was becoming available and convinced her to come see it. “Pretty much as soon as I drove up, I fell in love with what is now our HLB ATL space!” Morey also has a personal connection to the city, from childhood visits with her parents when they would drive in from Charleston for a “big city great food weekend,” and is thrilled to now be a part of Atlanta’s culinary scene herself. “[As a child] Atlanta wowed me with beautiful and tasty fancy restaurants and was my first experience in a Southern city with really phenomenal food. I feel like lately Atlanta has been having a re-birth – it’s amazing to witness all of the talent in the city.” 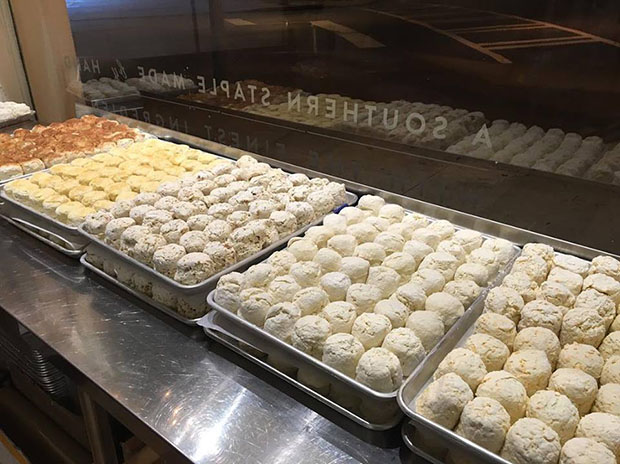 While Morey made her journey from Charleston to Atlanta, there are some characteristics of Atlanta’s food personality that she would love to see travel back to Charleston. “I think there are many more options in Atlanta than there are in Charleston. Not only in numbers, but in variety of cuisine. Charleston has the quality, but we could use more variety. I am ready for Charleston to offer more ethnic choices and I’d really like to see some female stars set up camp!”

As a female star herself, meanwhile, Morey’s decision to expand her camp to Atlanta has been reaffirmed everyday since the Virginia Highlands bakeshop opened its doors. “We have been overwhelmed with the kind of reception that Atlantans have shown us!” she said. “Not only have they showed up; they’ve been unbelievably kind, and most of all patient with our new opening kinks!”

Considering HLB ATL has only been open for two months, it’s fair that there are still kinks to work out, but one bite of a country ham or peach filled biscuit will leave any customer feeling that their patience has been well worth it.