Ilyanna De La Keur had to be rescued from a bathroom inside the Banks County Home Depot after a prankster put strong adhesive on a toilet seat. She waited 25 minutes for someone to find her, and then, if she wasn’t already embarrassed enough, she had to wait while the emergency responders used WD-40 to remove it from her bottom – while workers and shoppers watched. Two weeks later, she is still healing and unable to sit. The prankster remains unknown; however, authorities have gone as far as sending fingerprints out for testing. 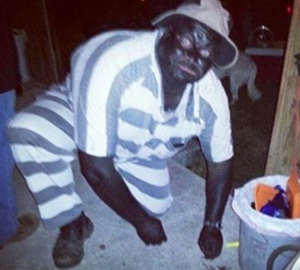 Chad Palmer, a 15-year veteran Camden County Sheriff, was surprised when he was suspended over his choice of Halloween costume: he apparently didn’t know that portraying a black prisoner picking cotton would be perceived as racist. He has since found himself on probation for a year after his suspension and he has also taken sensitivity classes.

Fool Me Once, Shame on You. Fool Me Twice…

A loss prevention officer at Walmart on Atlanta Hwy. in Loganville spotted a woman that had attempted to leave the store without paying for her purchase. Instead of calling the authorities, the Walmart employee decided to give the woman a second chance because the woman stated originally that she hadn’t intended on leaving the store. So, she went through the self checkout, and failed to pay for the following items: mayo, salad dressing, ketchup, carrots, veggie snacks, and a can of chicken breast, which would come to $15.43. The woman ended up being arrested and charged with shoplifting and criminal trespassing, as the woman had been caught shoplifting at another Walmart in 2010.

I don’t know what’s wrong with people over in Loganville, but a couple were found having sex in a truck parked in the Waffle House parking lot on Atlanta Highway while intoxicated. When the officers asked the couple to get dressed, the female tried to wear a cheeseburger as a sandal. It remains unclear if the truck belonged to the couple.