Students doing amazing things. Four teams have been selected as finalists in the 20th annual ULI/Gerald D. Hines Student Urban Design Competition, an event that challenges teams of graduate students to devise a comprehensive design and development plan for a real-world urban site.

The four finalists are:

From the Georgia Institute of Technology: LINKUP OAKLAND by Priyanka Shyamal Adhikari, Aparna Reghukumar, Kishore Kandasamy, Bea Wang, Yilun Zha. Fueled by Downtown Oakland’s long history of social inequities, racial injustice, and the resultant fractured development, LINKUP OAKLAND strives to become a pilot intervention in reinforcing historically significant and culturally imbued sites for Downtown Oakland and reestablishing the links for an equitable, inclusive, and well-connected Oakland. The team envisions the proposal to strengthen the links of historical importance, allow for cultural diversity, strive for ecological sustainability, and become an economic backbone for the whole of Oakland.

OAKLAND places equity at the center of the design to reframe the relationship of divisive infrastructures within the BIPOC community. The freeway is reframed to connect the neighborhood and activate the site to become a resource center and place for justice. The mixed-use development is anchored by cultural expression, affordable housing, and health that drive the growth of the site as a model for marginalized neighborhoods.

From the Massachusetts Institute of Technology and Harvard University: Konstellation by Vladimir Bogdashkin, Jin Gao, Akrisht Pandey, and Nwakaego Uzoh from MIT; and Boya Zhou from Harvard University. Through integrative site design and equitable community services, Konstellation seeks to create a connected and cohesive neighborhood that reflects the broad history and culture of Old Oakland.

From the University of Texas at Austin: The Stack by Sanket Kamdar, Sophia Aitken, Margaret Gallagher, Alay Thakrar, and Kent Carlson. The Stack supports three pillars: health, culture, and connection. This LEED Platinum, transit-oriented development would create a thriving, diverse, and integrated community reflective of Oakland’s culture and would be a catalyst for uplifting the city’s vulnerable residents. The Stack’s ambitious proposal transforms the area into a cultural and transit hub with a mission-driven, mixed-use program that drives positive social change for Oakland.

“We were pleased to see the students craft proposals that were not only innovative but also compelling, clear-sighted, and practical,” said ULI Hines Jury Chair Lynn Carlton, principal and regional leader of planning at HOK. “Each of this year’s finalists has a strong vision for downtown Oakland that would yield a thriving, vibrant community.”

The competition simulates a design, planning, and development scenario – and reflects Oakland’s desire to make its downtown district a dynamic place that serves all residents. The four teams will advance to the final round of the competition April 7. The winning team will receive a $50,000 prize, with $5,000 of the total going to the university or universities the team represents. Each of the remaining three finalist teams will receive $10,000.

During the last phase of the competition, the finalist teams will have the opportunity to expand their original projects and provide more detail for their plans. The finalists will tour the site on March 4 and rehearse their presentations on March 18 before making their pitch in the finals three weeks later.

The finalists were chosen from 93 entries by a jury of 15 ULI members representing a broad variety of real estate and related disciplines. Applicants were from 48 universities in the United States, Canada, China, the Netherlands, and Egypt. Thirty teams included students from more than one university.

The ULI Hines Student Competition was created with a generous endowment from longtime ULI leader Gerald Hines, founder of the Hines real estate organization. The program is part of an ongoing ULI effort to raise interest among young people in creating better communities and improving urban development patterns. The competition encourages cooperation and teamwork—necessary talents in the planning, design, and development of sustainable communities—among future land use professionals and allied professions. More information about the 2022 competition is available on ULI’s website. ULI hosted a webinar to announce the finalists on Tuesday, February 23 at 4:00 pm ET and a recording is available here. All submissions to the 2022 competition are available at uli.org/hines2022gallery. 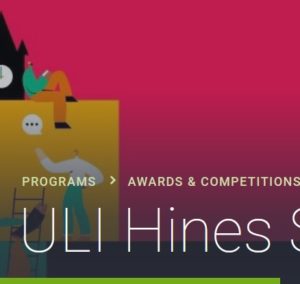 Trans Am Racing Comes to Georgia this Weekend