A new study from Infogroup found the U.S. cities with the highest concentration of coffee shops are also more likely to be home to businesses that have adopted eco-friendly practices.

Even with coffee prices on the rise, you can’t stop java lovers in Georgia from getting their cup of Joe, and if you live or work in Marietta or Alpharetta, it’s pretty easy to stumble upon a coffee joint.

Western cities have the highest concentration of coffee shops, making up 8 of the top 10 cities (6 of those 10 being the state of WA). To determine the list of top cities for green adopters, Infogroup used data from its Green Adopters for businesses, which identifies B2B prospects that are most likely to adopt eco-friendly measures on a scale of 0 to 5 (with 5 being most likely).

Top 10 coffee-drinking cities in the U.S.:

Feel free to check look at the image which details the lists, including their specific Green Adopter scores (ranked out of 5), the city’s number of businesses and population.

Nothing wrong with that morning cup of coffee. 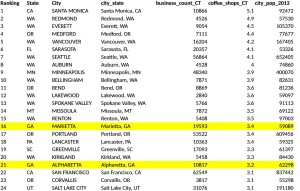 See the top cities in terms of concentration of coffee shops 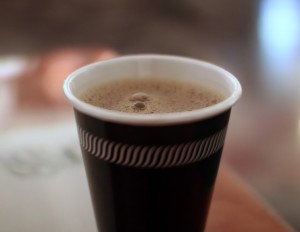 Marietta and Alpharetta are the kings of coffee in Georgia