Shameik Moore: More Than An Act

While Future’s DS2 is currently taking over the talk of timelines and hood water coolers (porches, corners and old school Chevy’s) alike, before this last week there was some other dope on the street.

On June 19, Dope was released in theaters and starred up-and-coming actor, Shameik Moore. If you’ve seen the film, then you may know that he acted out being a part of a band. Well, that was more than an act.

Moore has shown the world that there is more up his sleeve besides his acting chops. In Dope, Moore is in a band with his two friends and co-stars, called, Awreeoh (pronounced, “oreo”). In real life, Moore is on his own and is using his government name as the moniker. Recently, “King Sam” released an EP of six songs completely produced by T Black The Hitmaker affectionately named after his stomping grounds, 30058. If that number looks familiar for our Metro-ATL fans, then it should because it is the zip code for Lithonia, GA.

On the project, we are given a front row seat to the world of Moore in the sounds of R&B. I won’t compare the young man but I can say that between his role in Dope and this project that he has some similar, multi-talented promise like Jamie Foxx and some other actor/musicians that we have seen. If you are like me, and this summer’s film was your introduction to Moore then this is a pleasant next step in seeing the budding of young stars, particularly African Americans.

You can check out Dope in theaters now before you have to wait for the DVD. 30058 is available below and if you enjoy that, feel free to go back and listen to his 2012 effort, I Am Da Beat , hosted by Greg Street. Along with the EP, a video was also released that chronicles the recent success and surreal feeling that Moore has been in the midst of. Check that out below as well. You will hear tracks from the EP in the background.

Share this article and uplift this young brother from this red clay. Shameik Moore dances, sings and acts and is a product of Georgia. We hope to see him around for a long time doing all these things and more. 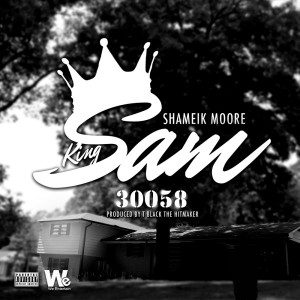