You REALLY Believe a Crackhead Set Fire to I-85? Stop.

Three homeless people, smoking crack under I-85, are apparently responsible for destroying the interstate and causing untold millions of dollars in infrastructure damage and untold millions more in economic damage. That’s what we are asked to think.

It’s not that I don’t believe that someone stupidly set fire to the combustible conduit stored under the bridge. The very quick arrest and arson charges for Basil Eleby may or may not be sustained. There will be hearings, and perhaps a trial, assuming Eleby doesn’t simply cut a deal like 90 percent of indigent criminal defendants do.

Let me state the obvious: whoever is responsible for storing material under the interstate that could melt a bridge had better still be in prison when Eleby gets out.

According to @AJC, Basil Eleby the I-85 bridge arson suspect talked about smoking crack before the blaze. pic.twitter.com/6zMJ330bQg

The Department of Transportation bears the true burden for this disaster. And that may be why state investigators quickly made an arrest of someone who doesn’t work in a business suit.

The second-day news stories weren’t looking at the chain of command, working their way down from GDOT Commissioner Russell McMurry, trying to figure out who had the legal authority to allow high-density plastic conduit to be stored under the highway.

Instead, it’s the easy story — pictures of the black guy in an orange jumpsuit that they’ve done a thousand times before. And, because it’s easy to report, everyone reported it, burying the real questions under a wave of sensational news about an alleged crackhead burning down I-85.

This is an image from Google Street View, before the fire. 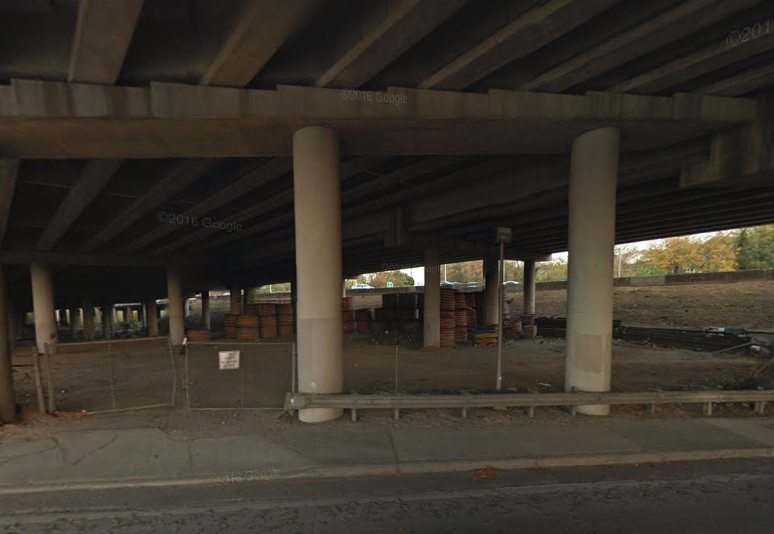 Reference page 13 of GDOT’s Design Policy Manual notes that the National Fire Protection Association code covers how GDOT is supposed to install fiber. Georgia uses an amended version of that code as the basis for its state minimum standard fire code.

Now, a robust argument can be had about how to classify stacks and stacks of plastic conduit for fire code purposes. If you call it a synthetic fiber, chapter 50 of the International Fire Code that the state uses says that no more than 1000 pounds of it should be stored together without additional protections. If we’re calling it a Class III combustible solid, the rules are different. In either case, the code requires adequate security for the storage of combustible materials, and that those materials be kept away from flammable stuff.

Take a look at the stacks there, of a product made from petroleum, up against the pylons of the bridge, and tell me a fire marshal would sign off on that.

I think someone violated policy. Someone has apparently been violating policy for about a decade — McMurry said it had been under there since as early as 2006.

Here’s GDOT’s organizational chart. Does field services in district 7 bear responsibility for storing this construction material? Was this an operations decision? A construction management decision?

GDOT employs about 4,000 people. None of the executives in that org chart have the words “safety” or “security” in their job title. Whoever’s job it is to figure out whether there are systematic risks to the transportation infrastructure in this town isn’t important enough to name.

And yet, at the exact moment this fire was burning, our beloved legislature voted to approve a new set of “domestic terrorism” statutes, primarily to empower state and local police to investigate private citizens suspected of plotting malicious acts threatening “critical infrastructure.”

No, that law would not apply to GDOT here. I checked.

The buck is going to be passed. Someone is inevitably going to argue that this kind of catastrophe could not have been predicted, that HDPE conduit isn’t normally all that flammable and that no one in charge of anything important at GDOT should be held responsible for a decision made 10 years ago to store the stuff under a bridge. It will be described as an organizational failure, because the department isn’t set up with an internal inspection system to catch these kinds of problems, OSHA be damned. They will say that they took security precautions — never mind the NFPA code — by storing it behind a locked gate.


The moment we hear anything like that will be the moment we should ask for Russell McMurry’s resignation.

Basil Eleby should not be the only person facing serious criminal charges today. They’re slapping the wrong face on this mess.

(Edits and corrections: I’d like to thank the commenters on this story for adding some context and correcting errors. The area of the span that collapsed was only about 100 feet long, though 350 feet of span will require replacement.

There is a valid question about whether the material stored under the bridge would have been considered flammable by NFPA standards. The correct term may be “combustible solids” which I don’t think anyone is likely to argue with after this result. The storage of a combustible solid is generally in line with that of a combustible liquid — which is covered by similar regulation, which does not appear to be adhered to here. Too much material, too little security.)

Atlanta Continues Churning Out Hilarious Memes After I-85 Collapses