Storm the Castle at Medieval Times on September 8

Medieval Times Dinner & Tournament’s Atlanta Castle will open its arena for Atlanta’s royal residents to unite and compete during a special “Storm the Castle” tournament, taking place at 2 p.m. Sunday, September 8. Previously only open to corporate groups as a team-building activity, the “Storm the Castle” event will challenge groups of friends and families to work together to complete various stations with medieval-themed activities, from playing knighting games in the sand to dressing in medieval, historically accurate costumes like the characters from the show.

“It’s a point of passion and pride for our castle to guarantee a fun event that brings friends, families and corporate groups together,” said Louis Ruocco, general manager of Medieval Times Atlanta. “This is the first time we are inviting the general public to an event we’ve been offering privately for years, and we’re excited to offer hands-on activities that will immerse guests in the twelfth century in an all-new way.

The “Storm the Castle” tournament is free to participants and open to the first 50 people to sign up online, in groups of ten. Each team must master the art of medieval royalty and knighthood at the following stations:

· Name the Virtues of Knighthood

All participants will be awarded a free Queen’s Royalty Upgrade – valued at more than $40 with premium seating, priority castle access and a framed group photo – with the purchase of tickets to the new, female-led show at 4:30 p.m. the day of the event, which includes a magnificent four-course feast and seats to the grand tournament, featuring the realm’s best knights. Each member of the winning “Storm the Castle” team will be presented with special gifts from the Queen herself, including a free hurricane glass to toast their hard-earned victory. 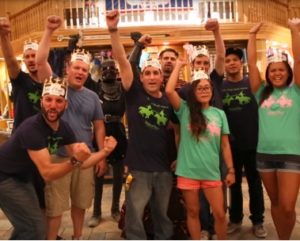