No Tiger defending his 2018 championship, but still a great field and interesting end to the 2018-19 PGA season.

It’s the 2019 Tour Championship and East Lake is the perfect setting for this finale of the wrap around PGA season.

The competition begins Thursday at 11am. Hailey Fisher, a member of The First Tee® of Metro Atlanta will hit the ceremonial first tee shot to begin the competition. In addition, the state champion Drew Charter School boys golf team will be recognized for their achievements as the first all-African American golf team to win a state championship in Georgia. Georgia Governor Brian Kemp will also join the festivities.

This year, the TOUR Championship’s final leaderboard will also represent the final FedExCup standings for the top 30 players. Stroke play will be used to determine the champion of the PGA TOUR’s season-long points race. To recognize players for their regular-season performance, there will be an unprecedented staggered start to the TOUR Championship utilizing a concept called Starting Strokes.

The FedExCup leaders will begin the event with a head-start on the competition. The player who finishes the four rounds at Atlanta’s East Lake Golf Club with the lowest score in relation to par will win the FedExCup.

“As soon as the TOUR Championship begins, any fan – no matter if they’ve followed the PGA TOUR all season or are just tuning in for the final event – can immediately understand what’s going on and what’s at stake for every single player in the field,” PGA TOUR Commissioner Jay Monahan said when the changes were announced last year. “And, of course, players will know exactly where they stand at all times while in play, which will ratchet up the drama, consequence and volatility of the competition down the stretch.”

Here is the new format once again this year. Justin Thomas leads in points coming in, and that puts him at 10 under par starting out, with 29 other golfers chasing him.

There are tickets available for each day here.

As a reminder, youth 18 and under are admitted free to the tournament grounds when accompanied by a ticketed adult.

Parking is different his year.

General Parking
Wednesday – Sunday: Public Parking will be available for $15 at the Georgia World Congress Center Marshalling Yard (362 Ivan Allen Jr. Blvd). Free tournament shuttles will be provided to and from East Lake Golf Club. Spectators MUST purchase a parking space in advance of arrival through ParkMobile. Limited availability.

Friday – Sunday: Additional Public Parking will be available for $10 at the City of College Park (2459 Riverdale Rd, College Park, GA). Free tournament shuttles will be provided to and from East Lake Golf Club. Spectators MUST purchase a parking space in advance of arrival through ParkMobile. Limited availability.

Handicap shuttles will only be available at the Georgia World Congress Center Public Parking lot.

This event is about golf and crowning a champion, but it’s so fun to get out and walk East Lake and see all this event has to offer. 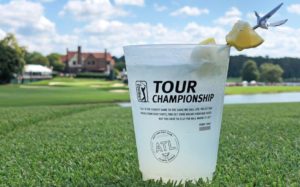 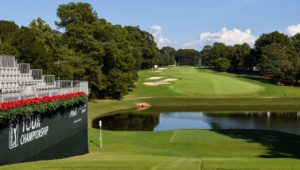