Hawks win their 11th straight over the Kings 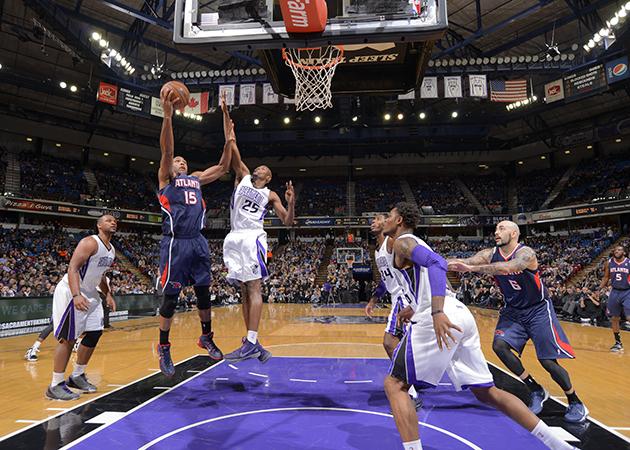 Sports Network – Al Horford scored 10 of his 27 points in the fourth quarter, including five in the last 1:04 as the Atlanta Hawks held on for a 105-100 win over the Sacramento Kings on Tuesday night.

The Hawks nearly coughed up a 19-point lead in the fourth quarter but Horford and Paul Millsap helped them avoid a collapse after Sacramento, sparked by Isaiah Thomas, got within a point.

Atlanta extended its winning streak over the Kings to 11 straight games since Sacramento’s last win in the series on Feb. 20, 2008.

“It got a little closer than we would have liked, but that’s the NBA,” said Hawks coach Mike Budenholzer.

Millsap had 25 points and 11 rebounds and Horford collected 10 boards for the Hawks, who snapped a six-game road losing streak dating back to last season and including their playoff series against Indiana.

It was Atlanta’s fifth win in their last 19 games away from home, including the postseason. Jeff Teague had 18 points and 10 assists in the win.

Thomas had 18 of his 26 points in the fourth quarter for the Kings but missed a contested 3-pointer in the final seconds with a chance to tie the game.

Marcus Thornton and Ben McLemore added 15 points apiece for the Kings, who have lost three in a row since opening the season with a win over Denver.

Sacramento started and finished strong, leading 32-25 after the first quarter and outscoring Atlanta 35-23 in the fourth. In between, the Kings gave up 57 points and scored just 33.

Millsap’s runner at the other end, Thornton’s 3-point miss from the corner and Millsap’s free throw built Atlanta’s lead to four with two minutes left.

In two frenetic series’, the teams exchanged steals twice in the span of a minute. The second one led to Thornton’s 3-pointer from the high left side with 32.2 seconds remaining to cut a six-point Atlanta lead to three.

After Millsap was short on a shot, Thomas got the ball on an inbounds play and missed a 3 under tight defense by Millsap and Teague on the high left side.

“We want to become a good defensive team,” Budenholzer said. “The first and fourth quarters are the ones we can look at on film.”

Regal Cinemas at Atlantic Station gets a VIP makeover

Is It Time For A Changing Of The Shin Guards? Brian McCann or Evan Gattis?